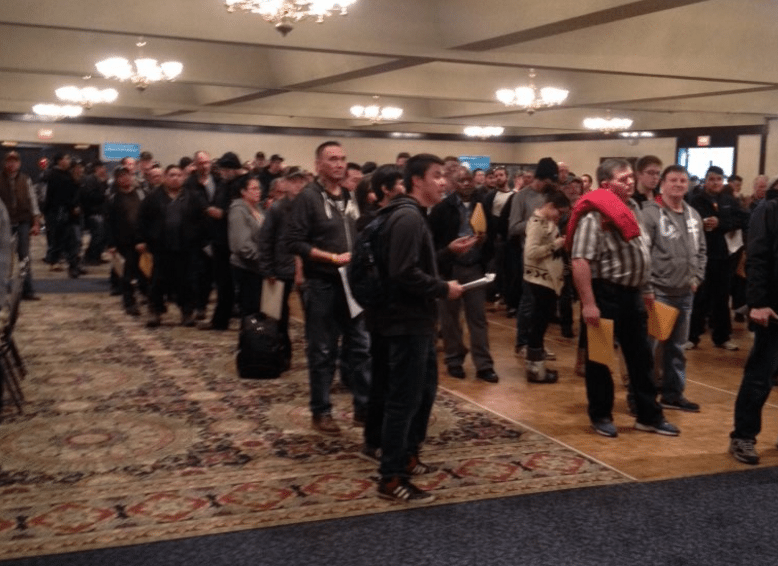 Hundreds of people were lined up before the Site C job fair even opened today at the Coast Inn of the North.

The hope of landing one of fifteen hundred jobs that will eventually be available with the main civil works contractor attracted people from many places with many trades.

A poll of the 90 minute long lineup this afternoon saw electricians, heavy equipment operators, cooks and more coming from as far as Edmonton or Kelowna.

“The goal here today is to get resumes in front of us.” Jim Schilling with the Peace River Hydro Partners said “So what we are doing, as you can appreciate there is so many people here, we are not reviewing every resume. We are taking them, having a conversation about what exactly type of job they are looking for.” 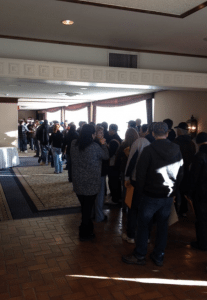 He added that are looking to get started hiring in 6-8 weeks. “But this is the whole process of getting a resume in front of the construction team so the cupboard’s not bare so when they need guys they have something to pick.”

Job fairs last week in the Peace region had similar turnouts, resulting in waits as long as three hours. The Alaska Highway News reported 500 people turned out the job fair in Chetwynd.

A spokesperson for BC Hydro says he estimates they talked to more than 1000 people over the course of the day, which ran 12-7pm.