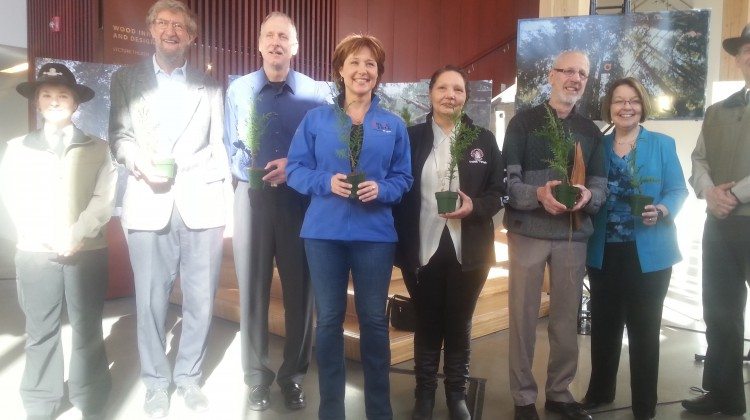 Premier Christy Clark was in Prince George today for an announcement at the Wood Innovation and Design Centre.

The Ancient Forest/Chun T’oh Wudujut about 120 kilometres east of Prince George will be becoming a Class A Park.

Legislation will be introduced tomorrow in Victoria that will protect 11,190 hectares of ancient cedar trees, which make up part of the only inland temperate rainforest in the world.

“This is a forest that includes thousand year old trees some of which are 16 metres in diametre and those are some of the rarest red cedars that can be found anywhere on earth.” Clark told a crowd in the lobby of the WIDC

Clark says once the space becomes a park they will push to designate the park a UNESCO World Heritage Site. “We hope that will be another way we can ensure its preservation but more importantly let the world know that here in British Columbia they can come see things that they cannot find anywhere else in the world.” 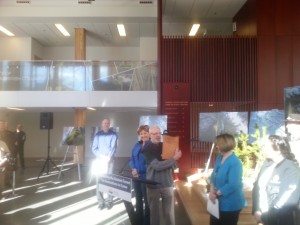 Nowell Senior telling “the Story of the Ancient Forest”

Although camping is unlikely, the Premier says it’s too soon to say what type of amenities will come to the site; only that the focus will be on preserving the unique biodiversity of the forest.

MLA Shirley Bond says that today’s announcement was the result of a decade of work by the Lheidli T’enneh and Caledonia Ramblers Hiking Society, which signed an agreement in July 2015 to protect the cedars. University of Northern British Columbia biology professor Darwin Coxson was also on hand for the announcement.

The Caledonia Ramblers has built and maintains three kilometres of walking trails and a 500 metre wheelchair accessible boardwalk.

“This is a type of forest that has survived all natural threats to its existence; drought, insect infestations, fires and disease have all been shrugged off by magnificent stands of 1,000 year old cedars.” Nowell Senior with the Caledonia Ramblers says

MLA Bond added that they have solid agreements with forest licensees in the area which will protect the biodiversity on the outskirts of the protected area.