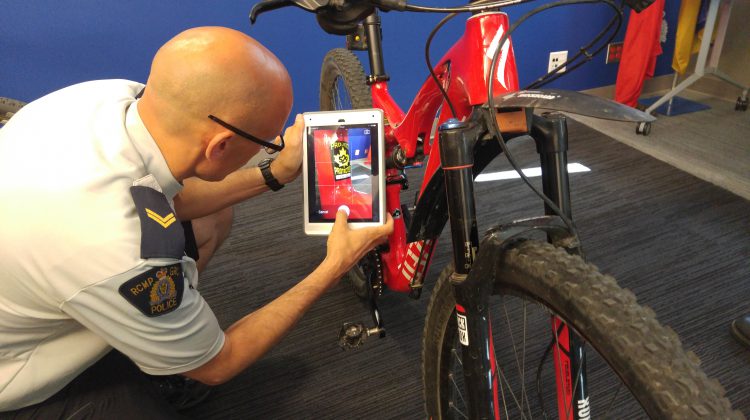 The Prince George RCMP are signing on with an online project to battle bicycle theft in the city.

In the first five months of 2016, there has been a 83% increase in reported bike theft compared to the same time in 2013. Stats Canada believes just one in four stolen bikes are actually reported, the Vancouver Police Department estimates that number is even lower; one in eight.

Right now, police are struggling to return stolen bikes to their rightful owners and hundreds are sold at auction every year.

“We have, somebody in the know told me, there is at least ten thousand high end bikes in Prince George.” Cpl Craig Douglass said “For our population that is a lot… with Pidherny, Otway and other locations and the road bike network as well, there is a lot of value to that.”

Project 529 is an online webtool and smartphone app that allows anyone to register their bicycle in about 5 minutes, by submitting pictures and the serial number to a database. In the case of a theft, the user can send out an alert to other users within a 15km radius of where the theft took place.

“This app allows us to search by serial number, by make and by model and we can go from there,” said Douglass “If we have three or four of the same make and model, we can look at photos and if there is a scratch or nick that’s in the photo that’s actually on the bike, then that’s enough to verify who owns that bike.”

Several other police forces around the province are also joining 529, with the VPD registering 600 bikes in one day during the project launch in Vancouver at Bike to Work Week. It has its roots in the United States, where it was founded in 2013.

The Prince George RCMP will be out at civic events this summer, like Canada Day, registering bikes for the public. If you register your bike with the Prince George RCMP at an event, you will be given a small identifying 529 bike decal and will be added to the PG RCMP’s own database – making it even easier for police to get your stolen bike back to you.

Douglass says officers will still routinely check the Project 529 database when they recover a stolen bicycles, so anyone that registers at home on their own will be protected.

The android app can be found here.