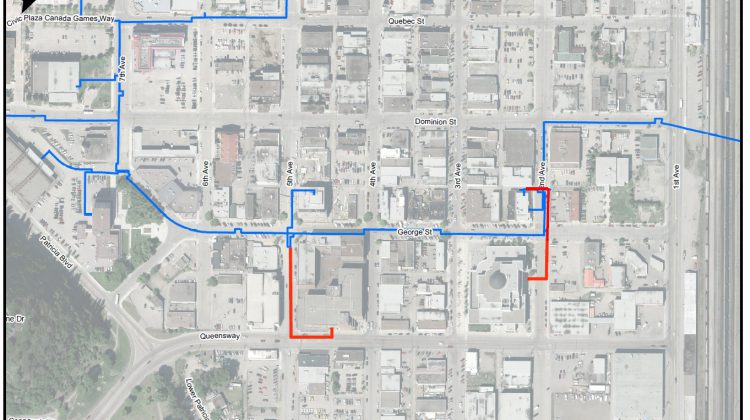 The Downtown Renewable Energy System. The new additions are marked in red.

Construction on the expansion to the city’s Downtown Renewable Energy System (DRES) has begun.

The Prince George Law Courts and Plaza 400 are being connected to the DRES, which uses sawmill residue from Lakeland Mills Ltd. to heat water, reducing greenhouse gas emissions and the city’s reliance on fossil fuels.

The work is expected to be complete by October. The new system should reduce greenhouse gas emissions from the two buildings by an estimated 480 tonnes per year.

But first, there will be some traffic disruptions.

Crews will be working between 7:00 am and 5:00 pm Monday to Friday and, while efforts will be made to minimize impacts, traffic will be periodically affected at:

Street parking in these areas may be restricted during construction but sidewalk use will be maintained.

The work will involve removing the existing road, curb and gutters as needed, excavating, installing the new piping system for the buildings and reconstruction of the roadway.

Downtown tenants have been notified about the construction.

The City says it appreciates the public’s patience during the process.