BC wines now on sale at Spruceland Save-on-Foods 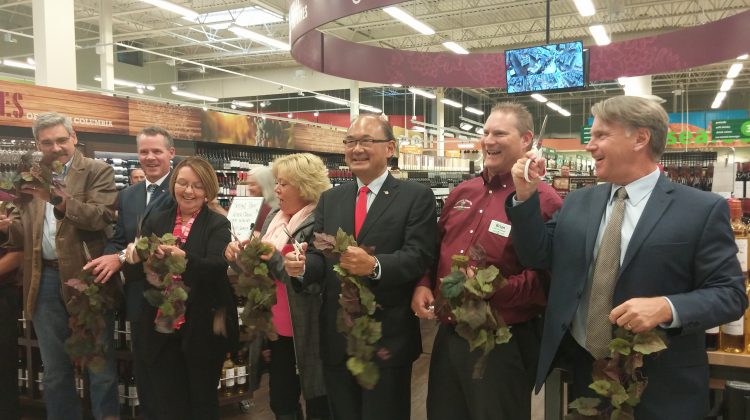 Wine lovers rejoice! The Spruceland Save on Foods now has a section selling BC wines.

Minister of Liquor Distribution John Yap attended the official opening of the first grocery store wine aisle in Prince George. Yap has been supervising the review of BC’s liquor laws.

“This has been an incredible 3 year journey. It’s great to see the smiling faces of British Columbians who now can have the convenience they’ve wished for that they’ve seen, perhaps in other jurisdictions and now we’re modernizing our liquor laws in BC.”

Save On’s license is one of two types of wine-only licenses available to grocery stores in BC. It’s issued through the BC Wine Institute.

“The number of wineries has grown exponentially and that puts a demand on shelf space, says Miles Prodan, president and CEO of the Institute. “There’s only so much shelf space in the retail world and so we need to make other opportunities. This is a great opportunity to get [BC wines] in front of different consumers across the province.”

Yap says six other licenses to sell BC wine were auctioned off to stores earlier this year.

A third option for certain stores is the ‘store within a store’ model, where a liquor outlet is essentially built inside a grocery store. These locations will be allowed to sell all kinds of alcohol to customers over 19. Dozens turned up to the official opening, featuring wine tastings from Hester Creek Winery, but not everyone in Prince George is keen on the new venture.

“We’ve got good capacity within our city for outlets for sale of liquor, says City Councillor Frank Everett. “More doesn’t always mean a better program. We’ve got people’s jobs that are on the line. I don’t see that having it in the grocery stores gives us more employment.”

Others think the benefits wine in the grocery stores will outweigh any risks.

“Wine on the shelves in grocery stores is not going to be the undoing of Prince George by any means,” says City Councillor Terry McConachie. “I don’t think it’s going to kill other businesses. I think the majority of people in Prince George will enjoy that convenience, to grab a bottle of wine with their groceries on the way home and do so in a responsible manner.”

Prodan says BC-only wine sections in grocery stores will be a boost to smaller producers.

“The challenge has always been where to find it and how to find it. Liquor stores have always been supportive of VQA wine but they have to sell other products as well. What you see here is only BC wine and that’s very special.”

For now, there’s only one grocery store in Prince George offering BC wines as part of the province’s newly relaxed liquor laws. No word yet on if or when other stores might follow suit.