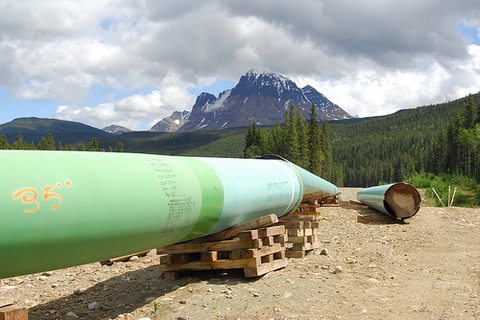 Enbridge says they will pursue re-engagement with directly affected First Nations communities along the proposed route of their Northern Gateway pipeline, a proposed project that would carry bitumen from Alberta through to Kitimat.

Northern Gateway announced today they would not appeal the Federal Court of Appeal’s decision to reverse the pipeline’s federal approval. The court cited a lack of meaningful consultation with impacted First Nations.

Chief Namoks of the Wet’suwet’en questions the move as just a PR strategy.

“How can you backtrack and say ‘we’re finally the good guys in this picture.’ They basically came around and ignored any input we had,” says Namoks, otherwise known as John Ridsdale with the Office of the Wet’suwet’en.

“They most certainly don’t have a good track record of working with First Nations. Is this another strategy they’re working through?”

He says they’ll be waiting to see what ‘strategy’ that is.

The announcement comes days before a treaty signing planned for Thursday, which will look to stop pipelines, tankers and trains carrying oil through indigenous territories at the Annual General Assembly for the Union of British Columbia Indian Chiefs in Vancouver.

Namoks says Enbridge will be one of the companies named in the ‘Treaty Alliance Against Tar Sands Expansion’ with chiefs across the country.

“Number one for us, they(Northern Gateway) must recognize the true and proper rights and title holders – we are the decision makers on the land as Wet’suwet’en.”

The Trudeau Government also announced today it would not be appealing the decision.