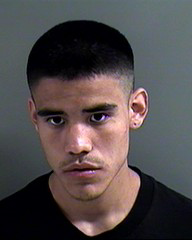 The Prince George RCMP are asking the public for help tracking down a man wanted in connection to a robbery of a local business.

On Tuesday Oct 25th at about 630pm, officers were called to a private liquor store on the 2300 block of Ferry Ave. Two men entered the store, threatened staff and fled with liquor and beer. Investigators say they were able to identify the suspects responsible for the crime.

The next day, one of the suspects was arrested at a business on Victoria Street. He was on probation for a previous offence, with one of the conditions of probation being to not enter a liquor store.

Chad Thomas Quaw, 21, is facing charges of Robbery and failing to comply with a probation order.

An arrest warrant has been issued for the second suspect, 19 year old Michael Campbell-Alexander. Charges of robbery and disguise with intent have been approved against him.

RCMP say Campbell-Alexander is considered violent and should not be approached.

He is described as: