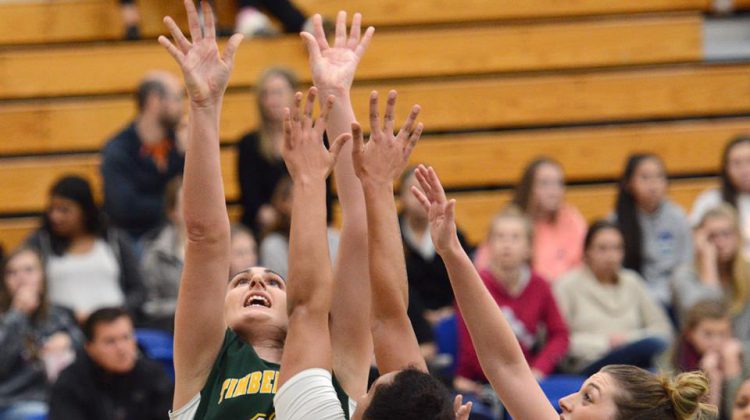 The UNBC Timberwolves women’s basketball erased a 27-16 first quarter deficit to rally for a 89-82 victory at the Northern Sports Centre on Friday against the TRU Wolfpack.

After trailing for a much of the first half the T-Wolves forced several turnovers that led to points near the end of the second quarter led by Issy Bourque and Madison Landry to make it a 44-41 contest after the opening 20.

In the second, UNBC seemed to make every shot early in the third quarter as Maria Mongomo who scored a team high 26 points hit 4 3-point shots in the quarter helping them outscore TRU 26-13 in the process.

The Timberwolves led by as many as 13 before a late surge by Wolfpack guard Audrey Rankin who nailed a chunk of her team leading 18 points from beyond the arch in the fourth quarter.

TRU Head Coach Scott Reeves says they were not good enough defensively after the first quarter. “We’ve got to block out, we have to take care of the basketball, we can’t throw it away and we’re not getting enough shots to stay in the game.”

Timberwolves Head Coach Sergey Shchepotkin believes their depth is starting to come to the forefront. “We have more than five players who start the game that can contribute and I believe any of my players can do that and they believe we can win and play as a team.”

The Lady Timberwolves improve to 2-8 and will finish the double header against the Wolfpack on Saturday at 5pm.

The UNBC mens basketball team suffered from a case of too little too late as they tried to erase a 50-26 halftime deficit against the Wolfpack before falling 87-81.

The game was dominated by 5th year TRU big-man Volodymyr Iegorov who notched 23 points in just 23 minutes of action.

The Timberwolves started to rally in the fourth quarter outscoring the Wolfpack 39-18 with Iegorov out of the game.

“The younger guys need to learn and how to play and develop even though there was a chance I could have bailed them out and put the older guys back in, I didn’t want to do that because they need to know how to play with a lead which they did a poor job of tonight and you hope they learn from that.”

T-Wolves Head Coach Todd Jordan believes even though they mounted a late run it is important to keep things in perspective.

“There’s a lot of fools gold where in garbage time we are playing against the second-stringers so we need to look at how we are coming out and starting games, we can’t get down like we did early and make some early adjustments against the Ukrainian kid and we just have to be tougher.”

“We can’t allow a team to shoot 67% in the first half and think we will be able to compete with them it’s just not going to happen.”

Timberwolves fall to 4-5 and play the rematch against the Wolfpack on Saturday at 7pm.