Overdose deaths in the province increased by nearly 80% in just 12 months. December was the deadliest month for overdoses that BC has ever seen. 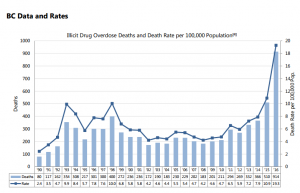 “One hundred and forty-two people died from illicit drug overdoses in December,” said Health Minister Terry Lake at a media event this afternoon. “Nine hundred and fourteen British Columbians in 2016. It is, without doubt, one of the most severe health crises that we have faced.”

Chief Coroner Lisa Lapointe says her office is conducting so many tests in related to fatal overdoses that they were unable to provide data for fentanyl related deaths for December. The BC Coroner’s service is now advising people not to uss any form of illicit drug without a medical expert present – saying the risks of drug use are now completely unmanageable.

“It should be stressed that these fatalities are not occurring only among those who use opioid drugs such as heroin,” Lapointe says. “Cocaine and methamphetamines are also being found in a high percentage of fentanyl detected deaths.”

Northern BC was part of December’s deadly trend. Ten people in the region suffered fatal overdoses – 10 times November’s total and the highest number in a single month since March, when 8 people died after using illicit drugs.

In 2016, 49 people across the north lost their lives to illicit drugs. In the Northern Health authority, there were 17.3 fatal overdoses per 100,000 people. That’s the second lowest ratio in the province and well below the provincial average of 19.3 deaths per 100,00. 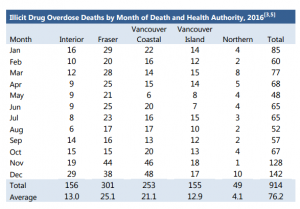 Minister Lake says the provincial government is doing everything it can to deal with the crisis.

“We’re expanding access to recovery supports in our province. The government promised to open 500 new substance use treatment beds by 2017. We’re on track to meet that commitment by the end of March but with these terrible numbers that we’re seeing, we know we need to do more and sooner.”

Lake also announced that the government will spend an additional $10 million to open a further 60 residential treatment beds. He says the beds could provide up to 240 people per year with 90 day treatment sessions and year-long support post-treatment.

You can read the BC Coroner’s service report for December here.