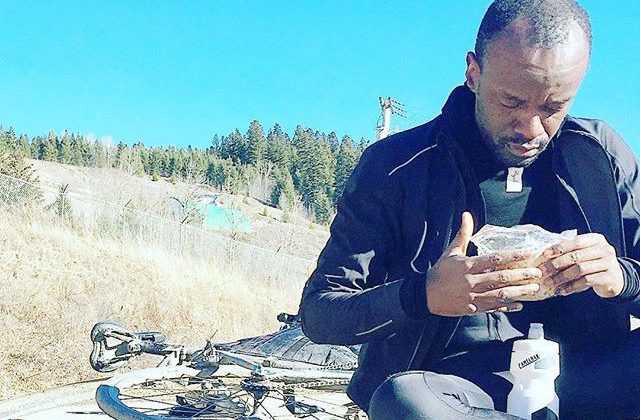 JaBig takes a break in BC Interior as part of his 15,000km ride across Canada | JaBig/Instagram

Have you ever thought about cycling across Canada, following in the footsteps of Canadian heroes like Terry Fox or Rick Hansen?

Chances are not many of us have considered attempting such a physical journey, but a Montreal man is close to finishing that challenge.

Radio DJ Jean-Aimé Bigirimana, better known as Ja-Big, has been on the road since January 2016 and recently made a pit stop in Prince George.

He says the stretch from Williams Lake to PG was one of his toughest challenges yet.

“I made a mistake of not checking the weather and not checking the elevation. I really was flying blind and from Hixon to here, it was raining and once it stopped raining, the best thing is just to keep pushing on.”

Tough day on the bike!!! First some endless hills then at Hixon, the halfway point, I got rained on non-stop until Prince George. I showed up at my hosts' covered in mud and in a rather bad mood but had to force myself to snap out of it since I had yet another radio interview with a local station (two today. I am on fire! Lol). Remember Carmen aka @carmenlangdon, the cookie lady from Lillooet? Well, she still has my back 500 km away. She found me accomodation with her family and I forgot to mention that she had another cookie sent to me while on the road and it got to me LOL I need get my bike serviced for the Prince George-Whitehorse leg. What's a good bike shop here please that knows fixed gear??

When the recently new Canadian citizen completes the 15,000-kilometre bike ride in Tuktoyaktuk, Northwest Territories by the Arctic Ocean, it will set a new Guinness World Record, but he says this journey is about much more than reaching to a higher gear.

“I’ve known more about the world than about Canada, so I figured what better way to discover this country than to do it by bicycle. It’s a personal challenge; I wanted to see what I was capable of because I’m single, I don’t have any children and I’m relatively healthy. So it was now or never.”

@HelloBC @CityofPG The welcome was warmer than Summer! Someone even sponsored a spa session for me 🙂 BC has really been good to me ?? pic.twitter.com/GxN2bCFQbk

Ja-Big adds his mental game has been one of toughest aspects along his trip, but he says it provides motivation to keep on pedalling.

“I’m enjoying what I’m doing! If I weren’t enjoying myself, I think I would’ve given up on day one. I really love cycling and I love discovering this country, and there’s always something to look forward to.”