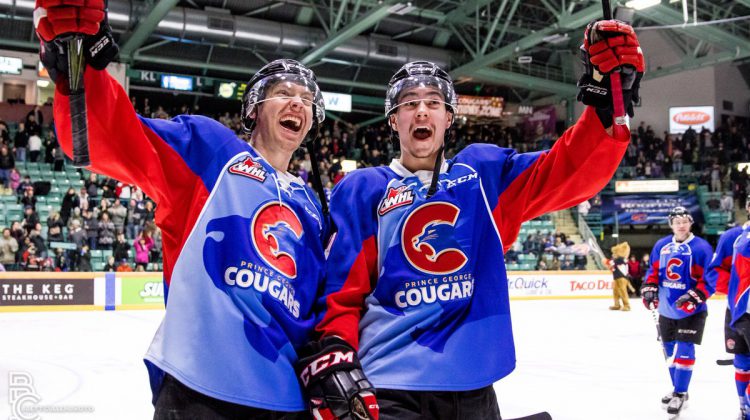 They may have lost their last game of the season, but the Cougars got the one point they needed to win their 1st BC Division title in team history | Brett Cullen Photography

High-octane offense, a controversial shootout goal, and a crowd of more than 5,800 at the CN Centre cheering loudly after a loss …

Sounds like a walk through the twilight zone, but you could call it ‘a perfect recipe’ for the Prince George Cougars Saturday night.

Despite losing 2-1 in a shootout to the Kamloops Blazers in their last game of the season, the Cats got one more point to stay ahead on the Kelowna Rockets, and clinch their 1st BC Division banner in their 23-year franchise history.

The Cougars earned a single point at home Saturday to clinch their first ever BC Division title!!

Cougars Head Coach Richard Matvichuk is grateful for the outstanding work his team has put in since Day 1 of the 2016-17 year.

“Unbelievable! We dressed great players, they came together day in and day out; it’s not just my team anymore, it’s the city’s team.”

Prince George came out firing on all cylinders, sending 18 shots towards the cage in the first frame, but Kamloops netminder Dylan Ferguson stood his ground, keeping the game scoreless.

The visiting team would put a scare to the Cougars fans, scoring the game’s opening goal 23 seconds into the middle period on a power-play, courtesy of Captain Collin Shirley.

Cougars’ defenceman Brendan Guhle however would ease the crowd’s tension with the eventual division-clinching goal, tucking the shot between the left post and Ferguson’s shoulder 15 minutes later.

.@blazerhockey opened the scoring, but @PGCougars answered! @guhles_ nets one near the post to tie the game 1-1 thru 40! #CityOfPG @mypgnow

“We got a great transaction out of Guhle! He’s part of a roster that we look at with confidence every day,” said Coach Matvichuk during 94.3 the GOAT’s post-game show.

The Sherwood Park, Alberta native would also play the time-killer late in the third period; Guhle’s stood behind his own net in the final minute of play for nearly 40 seconds to seal the Cougars’ first division banner, soon to be hanging from the rafters.

An eight-round shootout would be needed after overtime and forwards Nikita Popugaev and Kody McDonald were able to find an opening on Ferguson. Kamloops’ 16-year-old Brodi Stuart would score the shootout winner on a goal that was initially waved off before the puck trickled over the line, to which the referee overturned the call, giving the Blazers the 2-1 victory.

Ty Edmonds, now the winningest netminder in Cougars’ history, made 30 saves on the evening, while Ferguson stopped 47 of his own.

Coach Matvichuk says he’s looking forward to the next step on the team’s checklist.

“I couldn’t be more happier for these guys and of what they’ve accomplished this season, but now it’s time to get ready to go as far as we can in the playoffs. We’ll enjoy this moment, get more details on Monday, and come next Friday, we’ll be prepared.”

The Cougars will begin the WHL’s Western Conference playoffs with home ice advantage for Games 1 and 2 on March 24th and 26th.

HIGHLIGHTS: Relive the magic from when the Cougars clinched their first ever B.C. Division crown.