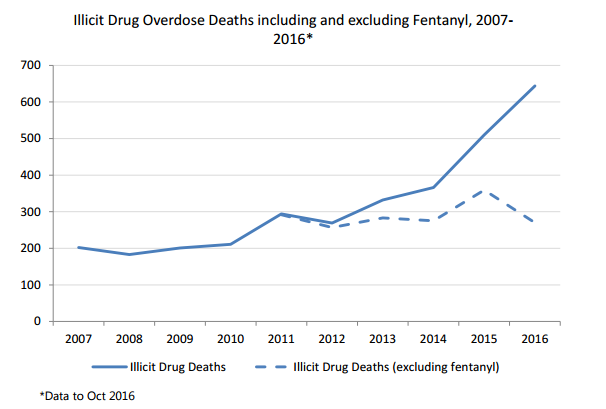 The number of fatal overdoses in British Columbia remained about 100 for the third month in a row in February.

One hundred and two British Columbians died from fatal overdoses last month – a 73% increase over the February 2016.

One bright spot: the number of fatal overdoses actually decreased slightly for the second month in a row – down from 117 in January and 142 in December.

“While I’m very relieved to see that the numbers have not continued to increase over the last two months, we are still losing cherished members of our communities at a terrible rate,” says Lisa Lapointe, BC’s Chief Coroner. “People are dying in far higher numbers than we’ve ever seen, and a slight decrease in fatalities from the previous month should not be seen as any indication that the risk has decreased.”

In fact, Northern Health’s Northern Interior region actually saw an increase – five overdose deaths in February after just one in January. For Northern Health as a whole, there were 52 fatal overdoses in 2016. 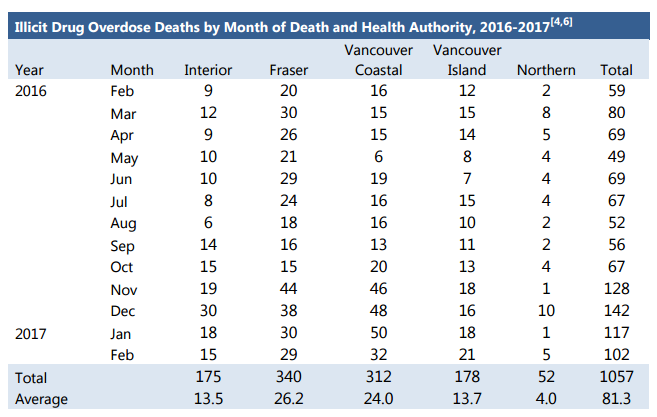 In Prince George, there have been four fatal overdoses so far this year – one in January and three in February.

Men make up 83% of fatal overdoses and 75% are people between the ages of 19 and 49. Cocaine is detected in about half of these deaths, with fentanyl and heroin each showing up in about 40% of cases. In 2014, the majority of overdoses occurred on Saturday and Sunday. Those number have since flattened out. so far in 2017, Mondays are the only weekday to see an average of fewer than 30 overdoses. Saturdays have seen an average of 36 fatal overdoses so far this year.

Coroner Lapointe has also noted that 89% of fatal overdoses happen inside – and most of those occur in homes. Not a single fatal overdose has been recorded at any of the province’s supervised consumption or overdose prevention sites.

“This is evidence that these sites are saving lives. People need to be encouraged to visit these sites as the majority of deaths are occurring when people use illicit substances without medical attention or assistance nearby.”

On February 17, Federal Health Minister Jane Philpott announced $10 million in federal funding for British Columbia, to support the provincial response to the crisis; the provincial government ponied up an additional $5 million. BC contends that it is making progress on the issue.

BC declared the opioid overdose crisis a public health emergency in April 2016 after more than 220 people died in the first three months of the year.

There have been so many fatal overdoses that the BC Coroner’s Service has been overwhelmed. In January, Lapointe announced that her office was so behind on testing for fetanyl that it would not be providing an update on fentanyl-related overdoses for December. It now says that an update will be available in April.

You can read the full report here.