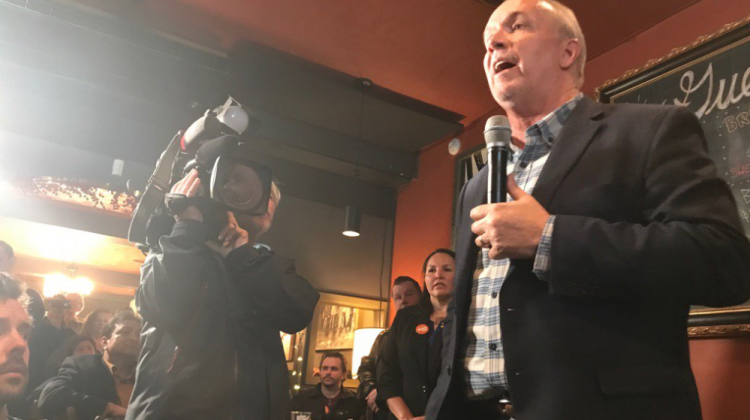 Referring to the downtown watering hole as a “dynamic and growing,” he says he chose the small business to hold the event because it represents the new Prince George.

He spoke to the full house, three local NDP candidates, and media from across the province about a number of key points from the party’s platform, including what he says is the party’s top priority: helping the federal government strike a softwood lumber trade deal with USA.

The platform outlines its desire to replace the 30,000 forestry jobs lost under the BC Liberal government. Even though it’s a federal issue, part of Horgan’s strategy includes being aggressive with the USA on a trade deal.

“(Current BC Liberal Leader and incumbent Premier) Christy Clark, rather than going and making the case for British Columbia, sent a bureaucrat (David Emerson), a capable one to be sure, but if (Premier) Brad Wall could go to represent Saskatchewan and (Premier) Rachel Notley could go to represent to Alberta, why didn’t BC show up with a political force to say ‘There are mutual interests between the United States and British Columbia, let’s work this through.”

He also discussed the possibility of adding something like surtaxes to exported logs, an idea originally shared by Prince George City Councillor Frank Everitt while Horgan took questions.

“I think that’s something that we should look at. If they’re going to put tariffs on our lumber going in there, then our logs aren’t free to them either,” he says, “our area has a lot of members that work in the forest industry, other unions work in this area as well in the pulp industry or in the PPWC and Interfor. All of those members depend on the forest industry and then the spin-off Industries are there as well.”

Horgan also addressed the rural/urban divide felt during this election period, one that many potential northern voters are feeling. Horgan, Clark, and Green Party leader Andrew Weaver are each running in southern ridings, and often speak to issues that are of no concern to northerners (ex. Lower Mainland bridge tolls). Horgan believes it’s these distinct communities across BC that are the Province’s bedrock.

I’m in #PrinceGeorge this morning, join me now for a live townhall: https://t.co/agsus5PEm6 #bcelxn17 #softwood

Long-time NDP supporter Betty Bekkering was sitting front and centre this morning, listening to Horgan from a nearby booth. She was pleased to hear his plans to lift those less fortunate out of poverty with higher welfare payments and $15/hour minimum wage. Bekkering, a former Prince George school board member, has seen the effects of impoverished children in the classroom. She says these are often the students who have trouble focusing, fall behind, and drop out. She believes the BC government should offer the needed income for these students, families, and those in similar situations, to exist and thrive in society.

“I think that his strategies are a really good start, it just feels good to hear,” she says, “if it’s even $100 a month maybe that’s just enough to be able to put some food on the table so that kids can go to school and have a full stomach.”

As things wound down, Horgan also addressed Prince George’s first all-candidates forum where neither NDP candidate Bobby Deepak nor Natalie Fletcher attended. Although he wasn’t aware of the situation, he said the following:

“It’s always a challenge. I missed an all-candidates meeting in my constituency because I had other responsibilities on the campaign so it could’ve been a scheduling issue. I know that our candidates here, Natalie, Bobby, and Anne-Marie are fully capable of standing up and talking about the issues and representing Prince George ably.”

Horgan and all party candidates have just under two more weeks of campaigning. General election day is May 9th.