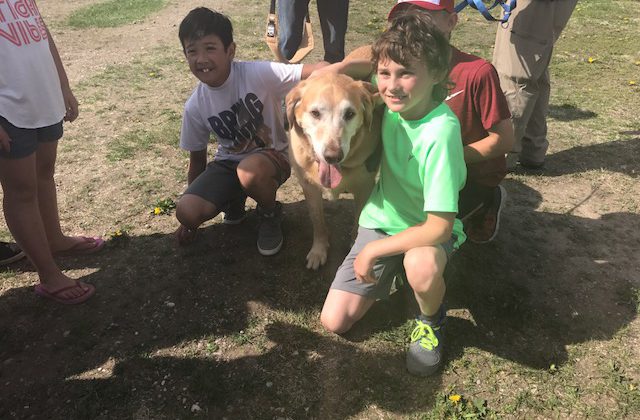 The RCMP Victims Services therapy dogs dropped in at the school. The visit was a joint effort between the RCMP, the Elizabeth Fry Society and the Native Healing Centre as part of Victims and Survivors of Crime Week, which began today. Now in its 12th year, the week features a variety of events aimed at raising awareness about the services available to victims of crime.

RCMP Victim Services Coordinator Krista Levar says the meet and greet was organized to give the kids a chance to get to know the local therapy dogs.

“If they do ever have to talk to police or go to court they have an opportunity to meet the dogs and know who they might be able to do that with. The reason we chose Heritage Elementary was because the principal here has Oliver, who was the first school district therapy dog.” Heritage principal Linda Picton owns Oliver, who spends a lot of time at the school.

“I’ve got kids who won’t talk to an adult but they’ll come and talk to him. They’ll lie on the floor, sometimes they’re crying and they just need a moment and they’ll say, ‘Can I go see Oliver?’ If someone’s crying, he’s very receptive to that. If he hears somebody crying on the bench, he will go up to them and put his paws up on them to see if they’re ok.”

Picton says Oliver is also popular with her staff.

Levar says the dogs make and difference for kids and adults alike.

“I’ve been blown away over the last five years. It’s been absolutely astounding seeing how they interact with kids, how they just calm people down right away. Max is pretty popular. He was actually the first dog in BC to go to court with a child victim.” Victims and Survivors of Crime Week runs until June 5. On Thursday, a luncheon celebrating the work of victim services providers will take place at The Twisted Cork. Levar says the goal of the week is offer opportunities for the public to learn about the issues that victims of crime often face and about the services available to them. Funding for the event comes from the Ministry of Justice.