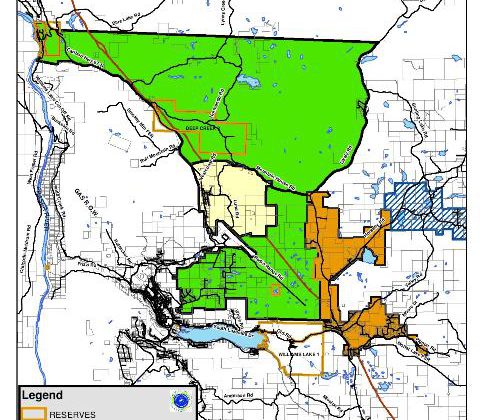 The Cariboo Regional District has expanded an Evacuation Order for the rest of Wildwood and for Soda Creek including Deep Creek and Soda Creek reserves as of 2 p.m. Sunday (July 9).

The Evacuation Order is also expanding to include the top of Fox Mountain.

This does not include Pine Valley or Commodore Heights.

“We encourage residents in that area to leave their homes in a safe manner immediately,” states the CRD. “Evacuees should register at the Emergency Services Reception Centre in Williams Lake at Lakecity Secondary School – Carson Campus.”

The CRD also issued today an expanded evacuation order the area along Highway 20 from 2 1/2 kilometres west of Alexis Creek to the Fraser River.

That includes the communities of Alexis Creek and Hanceville, the military range area, Riske Creek and 10 kilometres up the Chilcotin Meldrum Road.

A portion of that area was already under an evacuation order but part was only under an alert. That has changed and the whole area has now been evacuated.

Wildfires in the Cariboo have forced more than 3 thousand people from their homes.

That update, which only includes those registered, has 1800 registered in the Williams Lake area and around 1200 in the 100 Mile House area.

There are more than 7 thousand evacuees province-wide.

There are now more than 220 wildfires burning in BC, up from less than a hundred Saturday.

Earlier the size of the Gustafson fire near 100 Mile House was updated.

The smoke has cleared a bit in the South Cariboo and Heather Rice, the Fire Information Officer on that fire, now says it is about 5 thousand hectares, up from 3200.

Rice says the primary focus is on infrastructure and homes and the West Fraser and Norbord worksites.

While the skies are clearing somewhat in some parts of the Cariboo, the same can’t be said in the Quesnel area.

It is quite smokey and we have reports of ash particles falling in the South Hills area.

And earlier the Premier announced 100 million dollars for BC communities that are affected by the wildfires.

At This Point It’s all about Firefighting: BC Hydro