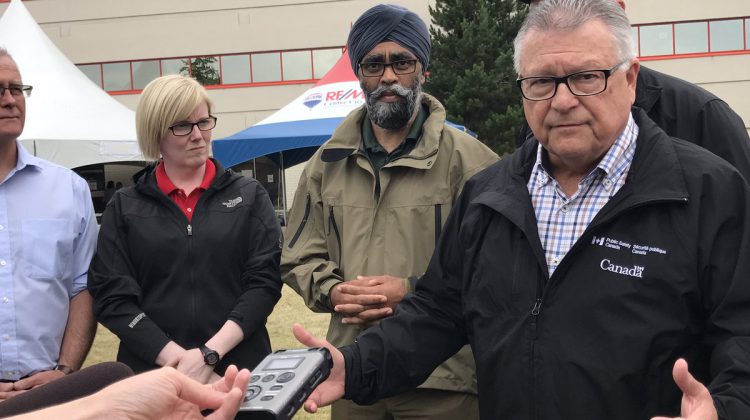 Goodale says in these particular circumstances, he commends the City of Prince George’s vigilance of providing for the people.

“First responders are amazing people. We’re anxious to say ‘Thank you’ to them from whatever stream or level or agency that they come from.”

He says money for economic restoration is being accumulated and calculated between all levels of government involved with the fires.

“There’s an established formula for dealing with disasters. The first portion of the expenses are the responsibility of the province. When the dollar value rises above the capacity of the province to cover that, the federal resources click in on a rising scale, and if the losses are truly significant, that scale can go all the way up to 90%.”

“The arithmetic takes some time; the expenses are still accumulating, but cash flow is not the immediate issue.”

.@RalphGoodale says "money to help" is being accumulated as we speak; supportive efforts need to be from #bcpoli, #cdnpoli | #BCWildfires pic.twitter.com/1CBhi4tO54

Though talks of re-entry strategies are circulating, Goodale says there are several steps when dealing with a natural disaster.

Emergency response is step one.

“Getting people out of harm’s way, fighting the fires, bringing all the necessary resources. Then, after you get by the immediate crisis, you’ve got that long process of restoration, rehabilitation, rebuilding, recovery; that will take a long period of time.”

Goodale ensures evacuees he is committed to getting positives results, making a promise to those emotionally affected in this process.

“We are standing with you. When I say we, I mean every level of government and across every partisan and distinction. People of British Columbia can be reassured that we will be doing every thing humanly possible to provide a seamless and complete response to help them through this difficult time.”

The Liberal MP for Regina-Wascana says multiple tangible and in-kind services the Canadian government is being provided, including the Canadian Forces, augmenting RCMP capacity, and providing cots and other necessities under the Public Health Agency of Canada.

Arrived at Prince George Evac Centre at the College of New Caledonia for an update with @CityofPG, MP Doherty & @redcrosscanada #BCWildfires pic.twitter.com/qwGE8yPWT1