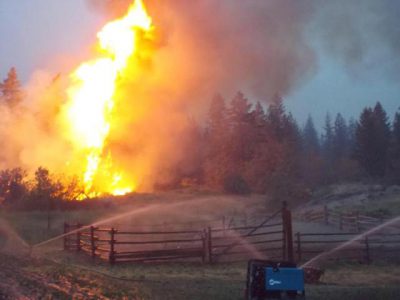 The Hanceville-Riske Creek wildfire remains listed as “out of control.”

Fire Information Officer Shayne McCool says the smoke lifted a little on Wednesday so they now have better mapping of that fire and it is now listed at around 215,000 hectares.

He says while some people who were evacuated were allowed to go home, they still need to be on alert.

“There are certain areas of the fire, Highway 20 for example, where the evacuation has been lifted to an alert so folks are able to travel that area of the fire. We don’t want people getting complacent, it’s still a very serious situation this fire and anybody who is in the area can tell just by the amount of smoke that is still in the air.”

McCool says some wind was expected yesterday but McCool says they are expecting a bit of an assist from Mother Nature after that.

“After that system moves through we are expecting cooler temperatures and higher relative humidity which will allow us to continue to make progress on the fire guards in the area as well. We’ve been using heavy equipment in areas all over the fire to enhancing guards and we’ve been burning off as well when appropriate.”

McCool says they also have structure protection units in the area to try to keep people’s homes from being effected by the fire.