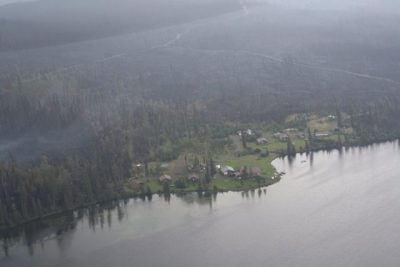 With files from Rebecca Kelli, MyCaribooNow.com

The worst fire season on record in B.C continues.

“Since April 1st we’ve responded to 1,068 fires across the province which have burned an estimated 1,021,982 hectares. That is very much an estimate and will very likely fluctuate both up and down.”

Skrepnek says the estimated costs of fire suppression to date through BC Wildfire Service is $361.5 million dollars. 3,900 personnel are working throughout the province today.

“Showers and thundershowers quite likely in the Cariboo as well as the Prince George and Southeast Fire Centres,” says Skrepnek.

“The cold front is going to move through these areas and is going to bring some gusty wind with it. We don’t yet have a handle on what those wind speeds are going to look like but certainly a concern given that we’ve got a lot of fire out there.”

Skrepnek says the unknown factor right now is how much precipitation is going to come with this system.

He says that were successful operations on Monday with the Hanceville Riske Creek fire which is now the third largest fire in the province’s history at an estimated 227,000 hectares.

The Elephant Hill in the Kamloops Fire Centre meanwhile remains static in size at 168,000 hectares and is 35% contained.

Skrepnek confirms that the Plateau Fire located 60km west of Quesnel and 60 km northwest of Williams Lake is the largest wildfire in the Province’s history. It is estimated at 467,461 hectares and still has the potential for growth.

As of the afternoon of Tuesday, August 22, there are 23 evacuation orders in B.C affecting 2,672 people. 12,387 people are on evacuation alert according to Emergency Management BC.