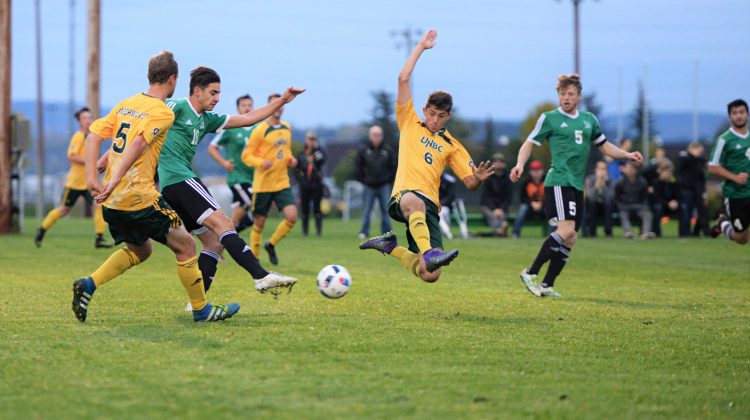 The UNBC Timberwolves Men’s soccer team kicks off its Canada West regular season with some home cooking against the Thompson Rivers (TRU) Wolfpack this Saturday and Sunday at 1PM.

Second-year midfielder Owen Stewart believes the Wolfpack will provide a stiff challenge right out of the gate, especially with TRU hosting Nationals this year.

“They definitely have some talent, it’s a good TRU side and it’s going to be a tough weekend, but I think every weekend in our division is tough. I don’t think there’s any team that’s easy and it’s just want to have to focus on, we have to focus on our performance and make sure everyone’s clicking on our team and then I think the result will take care of itself.”

The Timberwolves finished with a record of 4-10-2 last season, and are looking to climb the ladder in 2017 under third-year head coach Steve Simonson.

Simonson believes his deepest roster of talent could lead to various looks throughout the season.

“We’ve got different options that we can go to in terms of starters, in terms of subs and in players just outside the roster and then we have a bunch of kids that are here that have shown that they’re going to have a bright future here so I think what we’re going to do is just see how every game goes and just put the roster together that we need on the day.”

The countdown to the @canadawestinsta season is on. FOUR days until our Men’s soccer team welcomes @gotruwolfpack. You don’t want to miss it.

Most people on the outside might may think it’s a playoffs or bust mentality for UNBC this year.

However, Simonson doesn’t see it that way.

“It’s just do the best that you can because it’s a tough league that will have many good teams not in the playoffs this year. The talk amongst a lot of us in the coaching ranks is the parody that we’re starting to see with the likes of ourselves coming up and TRU making a good push and Okanagan and of course the teams from the Lower Mainland are always strong.”

The Timberwolves will also be aided by players returning to the program following a one-year absence for various reasons.

Matt Jubinville, Brett Bobier, and Clay Kiskilla were all on the 2015 roster and are looking to contribute.

Jubinville recorded three goals and one assist during that season

TRU has also added some international flavour, including Thomas Lantmeeters from Belgium, and Yuya Nakana from Japan.