Cozzi doubles down in BCHL debut against Chiefs 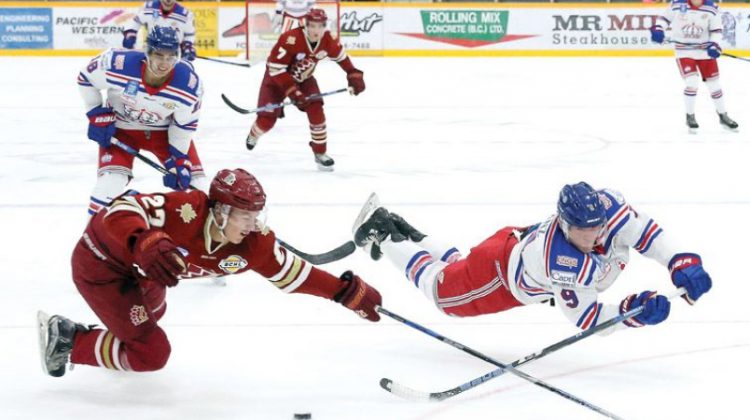 It was a memorable debut for Prince George Spruce Kings rookie forward Patrick Cozzi who suited up in his first BCHL game against the RBC Cup hosts the Chilliwack Chiefs.

The 19-year-old American notched a pair of goals during a 5-5 tie on Friday at the Rolling Mix Concrete Arena (RMCA).

The first one came on a bump up shift after Will Claverley lit the lamp for the Chiefs just 26 seconds into the game.

His second of the night came off of a sweet deflection in front of the goal after a hard shot from the point courtesy of Dylan Anhorn.

Cozzi says it was nice to cut his teeth at the Junior A ranks with one of the more intense rivalries in the BCHL’s Mainland Division.

“They are a really good team but I thought we outplayed them all game, we were fast and very prepared. It was a really good game to be apart of.”

The Greenlawn, New Jersey product suited up for the North Jersey Avalanche U-18 program last season collecting 26 points in 17 games.

Cozzi then made the trek out to British Columbia and into another country altogether, and says the move has been seamless.

“With the Avalanche, it was a midget team that really prepared us for the next level – it’s a lot faster and a lot more physical up here but I think with the training camp and development camp we had, all of the exhibition games prepared us for that first one.”

The Spruce Kings took the point on home ice after blowing a 4-2 lead in the second period and were forced to tie it up on a 6 on 4 power play goal from Liam Watson-Brawn.

Both teams drop the puck on Saturday at 7PM from the RMCA.