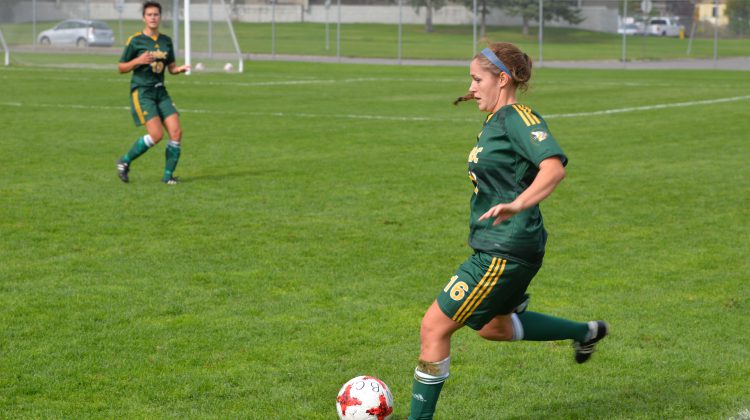 Madison Emmond’s goal proved to be the difference maker in a 2-1 UNBC Timberwolves victory over the UBC Okanagan Heat on Sunday in Canada West women’s soccer action.

#8 Madison Emmond with an amazing goal from outside the box! Putting your T-Wolves up 2-0 to the UBCO Heat @madisonemmond #gotwolves

Her seeing eye shot that got some serious hang time came down just in time to go over the head of UBCO goalkeeper Francesca Baletta. “I had a little bit of doubt that it was going to go in but I just crossed my fingers and hoped for the best.” says Emmond.

The T-Wolves improved to 2-0 after the opening weekend, which began with a convincing 3-0 victory on Friday over the TRU Wolfpack.

After jumping out to a 2-0 lead at the end of the first half, UBCO cranked up the pressure but UNBC goalkeeper Brooke Molby made several key saves early on to keep the lead intact.

The only blemish was a late goal by Susan Traynor who completed a nice set-up from Andrea Stinson.

Stinson nearly tied the game late, but found the crossbar.

Molby made seven saves in her first start at the Canada West level.

Paige Payne also picked up her first of the season for UNBC.

The win moves UNBC into a tie for first place in the Pacific Division with MacEwan and UBC at six points. Their one goal against is best among the top-three teams.

The Timberwolves will play host next weekend to Mount Royal on Friday at 5:30pm and Alberta on Sunday afternoon at 1:15.