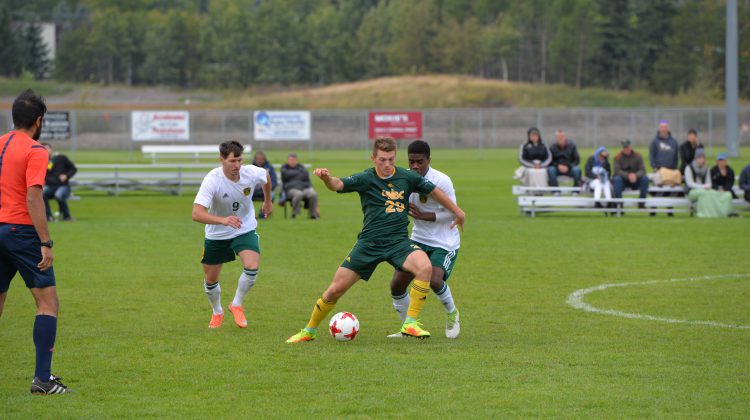 For the first time this Canada West soccer season, the UNBC Timberwolves varsity teams went a combined 0-4 over the weekend following losses of 3-1 and 4-0 on Sunday in Prince George.

Nikko Cuglieta was the difference for the Alberta Golden Bears picking up two goals off the bench in the second half to give the defending national champions the victory. “It was a good game. I am the glad the boys came out on top. We had a lot of space on the wings and used our speed pretty well and got some lucky chances.”

Final Score for Men's Soccer: 3-1 for U of A Golden Bears over our UNBC Twolves @BearsandPandas @UNBCMSoccer

The 3rd year product from Edmonton sealed the deal late in the second half beating UNBC goalkeeper Ty Venhola to a loose ball outside the box for his second of the game. “It was actually a little bit of a misplay as I was going for the chip but it worked out in the end,” said Cuglieta.

#9 Nikko Cuglietta scores his second in the 84 minute, U of A now leading 3-1 to UNBC Twolves

One of the bright spots for the Timberwolves was the play of second year man Jonah Smith who was flying all over the field.

His strongest play of the match came early in the first half when he drew a foul against Alberta goalie Connor James that led to a penalty kick goal from Tofa Fakunle.

“We talked about just getting in there and pressuring him (James) so I saw he was up in there and play it back and I just went for it, he got me and Tofa converted. That’s what he does, he is a great player.”

As for what went wrong in the second half, Smith couldn’t find too much to complain about. “Looking at this game, that is the national champions we held to a 1-1 draw for 60 minutes so if we just keep pushing and working, we’ll get the results that we want.”

On the women’s side, it was all Pandas all the time as Karissa McNutt and Sydney Daines scored two goals each to pace Alberta to the 4-0 shutout victory.

The speed of the Pandas seemed to be too much to handle for UNBC as the U of A swarmed T-Wolves goalkeeper Brooke Molby every chance they got. 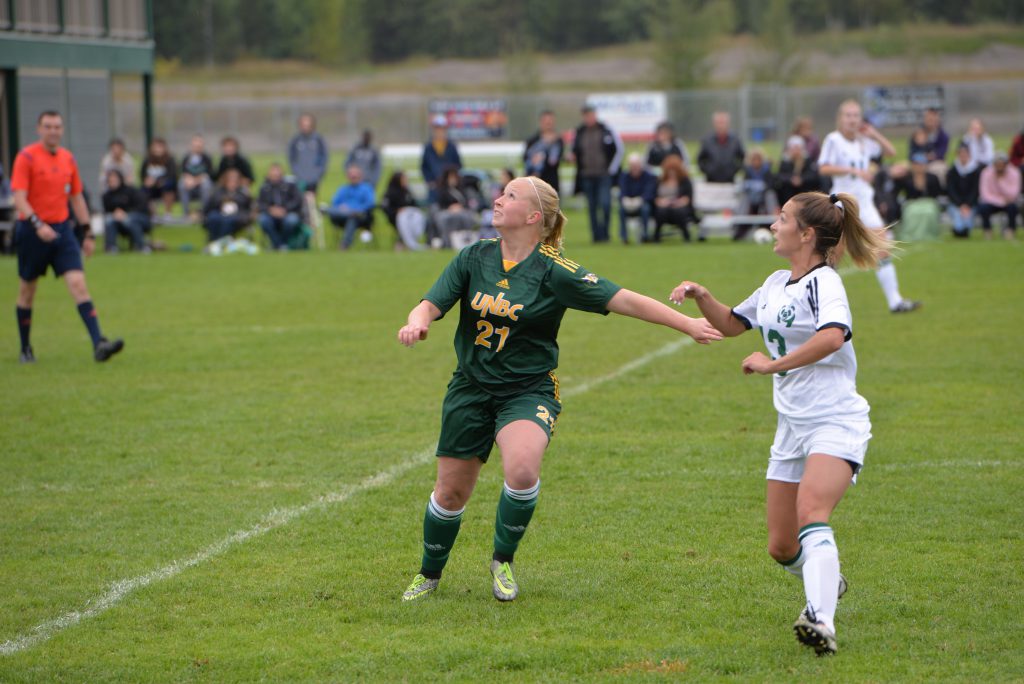 McNutt says it was nice to finally get rewarded offensively. “We just got in behind them through the seams and we wanted to keep the ball away from their big defender because she is a really good tackler. Once we got it to the other side we knew we could get past them.”

The Timberwolves drop to 2-2 on the season and will host the Trinity Western Spartans and Fraser Valley Cascades next Friday and Sunday.

Defender, Mara McCleary says the team already has a checklist of things to clean up. “Our possession might be a thing, we noticed our passing was off this weekend so that will be something to work on.”

UNBC is now fourth place in the Pacific Division.