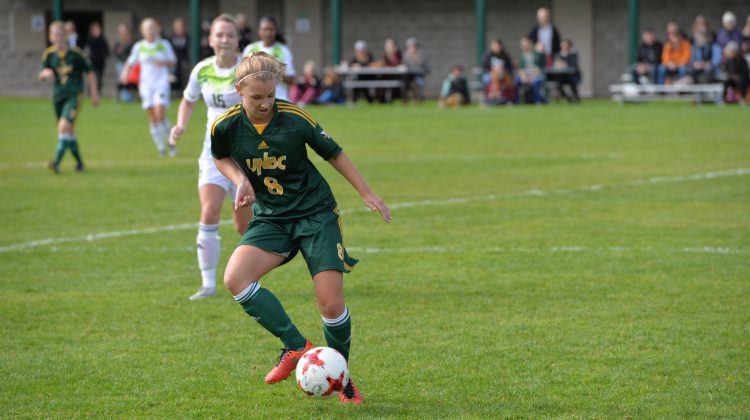 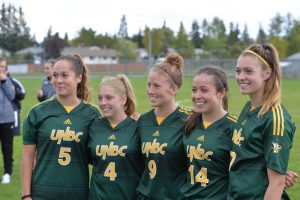 Despite carrying the play for most of the game, the UNBC Timberwolves women’s soccer team fell 3-0 against the University of Fraser Valley Cascades from the North Cariboo Senior Soccer League (NCSSL) fields.

After a tight-checking first half to begin Sunday’s game, the wheels fell off for UNBC in the final 45 minutes giving up goals to Tripat Sandhu, Gurneet Dhaliwal, and Taylor Nekic.

The defeat drops the T-Wolves to 2-4 on the season and put a slight damper on the farewell presentation to graduating players Tianna Pius, Tianna Rossi, Rhianne Ferdinandi, Fiona Raymond and Sidney Roy (fourth-year eligibility).

After the game, Ferdinandi says the loss is a tough pill to swallow after a strong start.

“I thought we were pulling the ball well and we were actually playing through them and keeping it. I thought we did great and had good intensity but we just didn’t get the chances we needed and they capitalized on theirs.”

Ferdinandi also took some time to reflect on her five-year tenure at UNBC.

“The community that my team has created for me and the Timberwolves along with the athletic department, in general, has been a big support for me throughout my five years and it’s good to have this with all my friends. We are all one big family and it is awesome to have them to rely on and fall back on.”

The Timberwolves will now finish their season on a lengthy road trip, which begins next weekend against Victoria and UBC Okanagan. 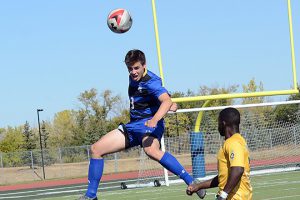 Photo courtesy of University of Lethbridge

In men’s action, UNBC split a pair of road games in Alberta.

It started out with a convincing 3-0 victory against the MacEwan Griffins in Edmonton on Saturday.

On Sunday, the Lethbridge Pronghorns edged UNBC 1-0 on Sunday with the lone goal coming off the boot of Dominique Point du Jour in the 72nd minute.

The T-Wolves are now 3-4-3 on the season and will host the UBC Thunderbirds next Friday and Saturday at 7PM from the NCSSL fields.