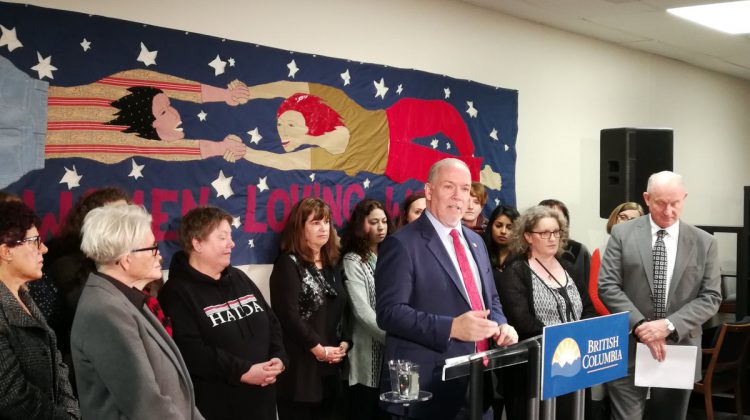 The provincial government says it’s making an effort to help women and children subjected to domestic violence across BC.

A one-time investment of $5 million is going to support programs for victims to receive counselling and other services.

Premier John Horgan characterizes this funding as modest to begin, but long overdue.

“It speaks to the challenge we have as a community and this is all of us in this together; men and women families and their living on their own. We all have an enormous need for community and with waitlists of up to two years at a time, we have an awful lot of work to do.”

.@jjhorgan: $5M goal is to reduce service waiting lists at support centres across the province short & long-term; "this will prevent any further gender-based violence" | #bcpoli

According to the Ending Violence Association of BC (EVA-BC), women and children are losing time being put on these extensive waitlists.

Executive Director Tracy Porteous claims they have faced several challenges by the previous government as a result.

“Women who are entitled to family law supports and systems and incomes, or access to disability or income assistances of any kind have been incredibly challenging. So all of these things need to be addressed in order for women to have the freedom to make the choices they need to make, when they need to make them.”

Our Executive Director Tracy Porteous "what we are seeing now is a convergence of people saying no more silence" pic.twitter.com/7oxVqJasw4

She adds some of the women choose to stay in abusive relationships to have access to primary resources short-term.

The other $1 million will be split between police-related teams combatting high-risk domestic violence cases ($800,000), and prevention programs ($200,000).

.@jjhorgan: Increasing awareness on non-violence towards women & children is critical for survival, which means more resources need to be provided | #bcpoli