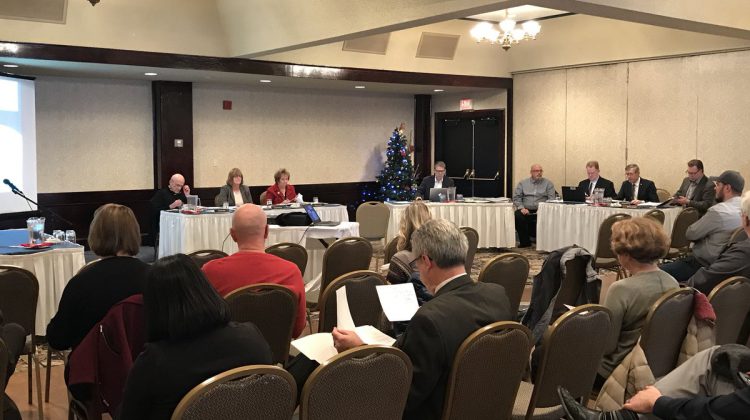 Members of the Passenger Transportation Board (PTB) meet with Prince George residents, elected officials on Greyhound possible cancelling its services in Northern BC | Kyle Balzer, My PG Now Northern BC residents and representatives have made it clear… they don’t want Greyhound to shut down its bus routes in the region.

This morning at the Coast Inn of the North in Prince George, almost two dozen community members voiced concerns of public safety to BC’s Passenger Transportation Board (PTB).

District of Vanderhoof Mayor Gerry Thiessen believes rural areas in particular need the service more than anything with a better schedule for arrivals and departures.

“You can not ask people in rural communities, especially young people, single moms, and small families, to get up in the middle of night to catch the bus and get to either Prince Rupert or Prince George, which is a major hub for Vanderhoof residents.”

However, Greyhound Canada Senior Vice-President Stuart Kendrick claims ridership is not heavily present with a 46% decline since 2010.

“We sympathize with that obviously, but the key here is that private carriers are not viable, which is why we’re in a situation where these routes aren’t sustainable for our employees and we have to abandon them as a result.”

Residents and other elected officials also say having Greyhound buses on routes, like Highway 97 North and South, and Highway 16 West, provide a safe form of transportation, being able to visit their loved ones in and out of the region itself.

While he sympathizes, Kendrick adds the company sees less than a dozen riders in smaller towns.

“On most of the route and corridors like Prince George and Prince Rupert, the average load factor is under 12 people and in some cases under 10 per day per schedule, and for any carrier, you need that number I’m here to at least 30 every day. That’s the issue we’re dealing with.”

.@GreyhoundBus Senior VP Stuart Kendrick was also present at PTB hearing this AM in #CityOfPG; he heard unanimous pleas to not take bus routes out of the region | #NorthernBC pic.twitter.com/XyTu5AwWm8

Prince George Mayor Lyn Hall shared his concerns and provided recommendations to the PTB and the BC Government based on conversations with other mayors at the UBCM Convention in Vancouver earlier this year, including:

Hall added from Greyhound’s perspective, the new BC Transit route along Highway 16 could’ve also been a factor in the company’s decision to try and pull out.

On the other hand, Mayor Thiessen doesn’t agree.

“My feeling is that they were already talking about how they were having some problems. The Highway 16 Transit was just a response to a concern that we had out there. Either way, we need to make sure that this area is as safe as possible.”

The PTB will make a decision to either accept or deny Greyhound’s application in the new year.

Three other meetings are on the docket, continuing tomorrow (Tuesday) in Terrace, Wednesday in Smithers, and Thursday in Fort St. John.

If approved, routes could be eliminated as early as January 7th.