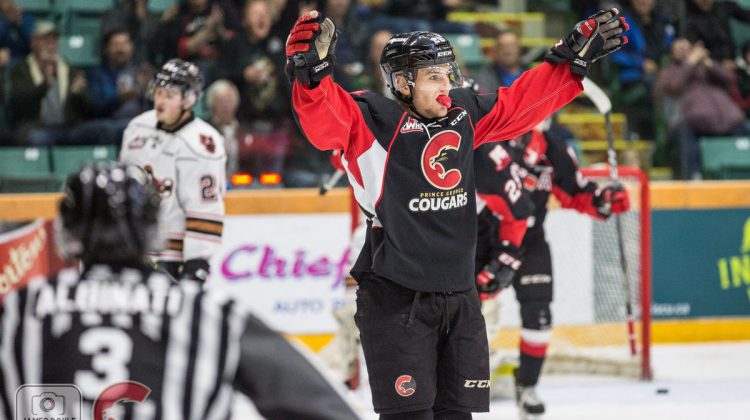 On the night the Prince George Cougars traded Kody McDonald to the Prince Albert Raiders, his former line-mate Jared Bethune notched a hat-trick performance in a 4-3 victory over Tri-City Friday.

This season, McDonald tallied a team high 19 goals and 36 points in 35 games.

In return, the Cats have acquired a pair of defencemen from the Raiders, 18-year-old Fort St. John native Austin Crossley and 16-year-old Lloydminster, Alberta product Rhett Rhinehart, as well as a first-round pick in the 2018 WHL Bantam Draft.

Prince George also gave a conditional fourth-round pick in the 2018 WHL Bantam Draft to Prince Albert in the deal. Cougars’ Head Coach Richard Matvichuk claims veterans like Bethune have influenced his rookies to capitalize on offense when opportunities present themselves.

“We clogged up the neutral zone very right. Our guys handled it really well and we shot the puck when they were supposed to and you know what, we got some young forwards out there, and if veterans can step up, then we can use that to our advantage in future games.”

Bethune opened the scoring in the first frame on the power-play, which was immediately followed by his second tally just two minutes later to give Prince George the 2-0 lead.

After Tri-City took displeasure to the deficit with a fight to close the opening 20 minutes, the Americans cut the lead to 2-1 early in the second stanza.

Maser would tip in a loose puck to restore the home team’s two-goal advantage later in the frame, while Bethune lit his third lamp of the game seven minutes into the final period.

After taking notice of scoring from the same spot three times in one night, Bethune believes McDonald’s past power-plays contributed to all his goals.

“Just watching where he’s played over the years, I got to see where his sweet spot was and I knew I had to step up and shoot the puck. The first one was kind of lucky because of the tip in, and my confidence just booted from there.”

Tri-City would add two goals in an attempted comeback, but the Cougars would hang on for their 15th win of the season, and second straight home win dating back to December 12th.

Prince George find themselves tied with Kamloops for fourth place in the BC Division standings (15-18-4-2), 12 points back of the third-place Victoria Royals.

Heading into the second of a weekend doubleheader against the Amerks, Bethune says all his teammate had missed playing in the Northern capital over the Christmas break.

“It’s a learning experience for us players, and we know that they’re going to come out even harder and we just need focus on one game at a time, one period at a time, and one shift at a time every single day we play.”

Tonight’s opening puck-drop at the CN Centre goes for 7PM.