The Cougars send their captain to Portland 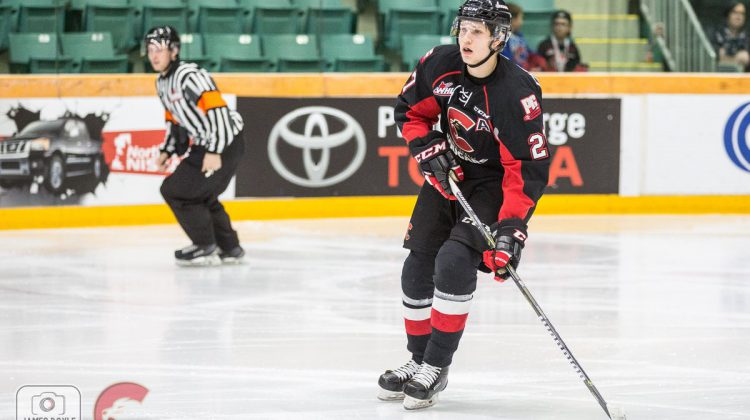 “Dennis is a great kid, who came in here this season and blew us away with his character and leadership qualities,” said General Manager Todd Harkins in a team news release.

“He’s one of the most exciting players to watch in our league and he’s getting a great opportunity in Portland.”

The Cougars named Cholowski the 23rd Captain in franchise history on November 21st, in his first season with Prince George.

“Dennis is a very special player and already carries himself like a pro,” Head Coach Richard Matvichuk praises the former Cougars captain in a team news release.

“His attitude and commitment to his team and teammates is second to none and I can’t wait to see him in the NHL with Detroit.”

“I really enjoyed my time with such a first-class organization,” said Cholowski in a team news release.

“From the coaches, front office, my teammates to the community, it’s been a fantastic experience and an honour to be the Captain. I’ll cherish my time in Prince George and the lasting memories I made here.”

It wasn’t a long time, but the Captain gave us some unforgettable moments this year https://t.co/uQtFQUAopG#BuzzerBeater #WHL

Colina has 15 points (three goals) in 37 games with Portland this season.

“Ilijah is a very dynamic, skilled centreman, who’s tenacious on both sides of the puck,” said Harkins of the 17-year-old, in a team news release.

“He’s got great vision, a natural play-maker and someone we’ve watched for quite some time and he’s always been near the top of his age group.”

“Connor has the prototypical power-forward makeup and is a centreman and has shown to be a proven goal-scorer at the Bantam and Midget levels,” explained Harkins in a team news release on the prospect forward.

“We believe he can make an impact at this level, playing down the middle”

This was the Cougars sixth deal since January 1st.

– With files from Matt Fetinko