By Josh, the Cougars win in overtime 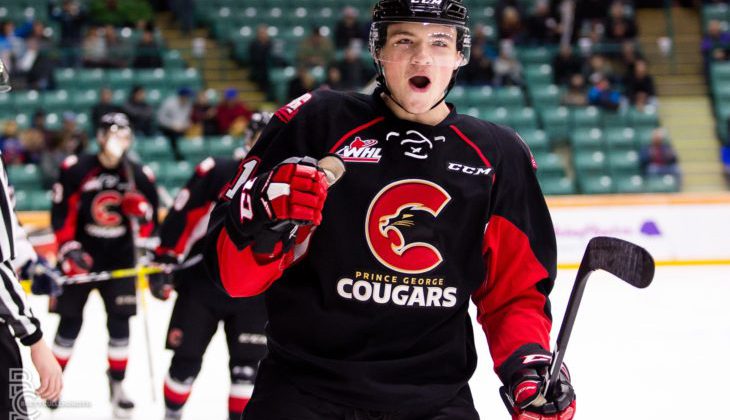 The Prince George Cougars may have traded away front line players Dennis Cholowski, Kody McDonald and Josh Anderson in the past week, but they kept the one and only Josh Maser.

It was Josh Maser four and Ty Ronning three!

The Cougars are thankful they had the 18-year-old sniper from Houston, BC on their side in posting the 4-3 overtime victory over the Vancouver Giants before 2,495 fans at the CN Centre.

It was a case of anything you can do, I can do better.

Then Maser to work as he tallied at 9:17 of the second and just eight seconds into the third, before completing his hat trick with just 2:25 left in regulation time.

.@joshmaser88 makes it a ??? night, boosting @PGCougars into a 3-2 against @WHLGiants at 17:55 of the final frame | #CityOfPG #Sports @mypgnow pic.twitter.com/IRGvZlSyPr

The five-foot-nine, 172-pound Ronning, from Burnaby, produced his own hat trick in the clutch, scoring with just 29.9 seconds left in the third.

The six-foot-two, 215-pound Maser would have the last laugh, poking home a rebound, his 20th goal of the season at 2:49 of overtime.

“It was a pretty crazy game, obviously we’ve had a lot of trades lately and a lot of new faces down in the room who don’t quite know our systems yet so we just had to keep things simple out there,” said Maser on 94.3 the GOAT‘s post-game show.

“Any time we beat the Giants it’s special, but tonight (Wednesday) I think it was a really big win for our team and it brought us together a lot, added Maser.”

Josh Curtis picked up a pair of assists in the victory.

Taylor Gauthier won the battle in net with 27 saves on 30 shots while Vancouver’s David Tendeck stopped 33 of 37.

The Cougars finished 2-1-1 on a four game home stand and 4-3-1 in the eight game season series against Vancouver.

The 16-19-4-3 Cougars are six points behind the Spokane Chiefs for the last wild-card playoff spot and Prince George will play its next game Friday in Spokane.

– with files from Kyle Balzer, My PG Now