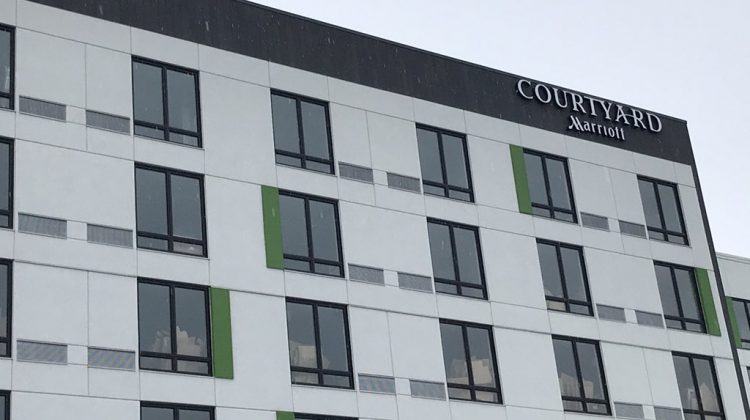 A first of its kind hotel in BC two months away from opening for business and/or leisure in downtown Prince George.

The new Courtyard Marriott is scheduled to open May 15th after months of construction and years of development.

The American-based company was originally planning to build the hotel in Delta, to be completed by 2013, but switched to the Northern capital in 2016 due to more opportunities for local economic development impact.

That’s according to ONE Lodging Management spokesperson Bruce Beatty, who believes this project will provide that boost in several aspects.

“There are thousands of new guests coming into the marketplace; well, they’re going to want to go out and eat somewhere, they got to spend their money at stores, and other tasks when in town. So I think it’s going to be a real boom for the community; Prince George is becoming a leisure city, especially on the weekends. There’s the recent referendum the City had with building a new Aquatics Centre downtown, so that’ll bring plenty of attention on top of this project.”

He adds artwork of the Lheidli T’enneh First Nation will be on display for all to see in honour of the traditional territory the hotel stands on.

“It’s all about trying to have that welcoming appeal to all of our guests and not having people like they’re not ‘coming home,’ so to speak, when they come to the hotel. It’s very inviting, very warm, and certainly having that First Nations input on the building is great for us and great for them too.”

Host First Nation Elder Mary Gouchie has provided ONE Lodging with translations says Beatty, explaining she herself has been ecstatic about the hotel’s opening as well.

.@CourtyardHotels gives sneak peek of new location in #CityOfPG; 120 construction workers overseeing the first of its kind project in all of BC, originally was to be built in #DeltaBC pic.twitter.com/Uz4T5b2E5Y