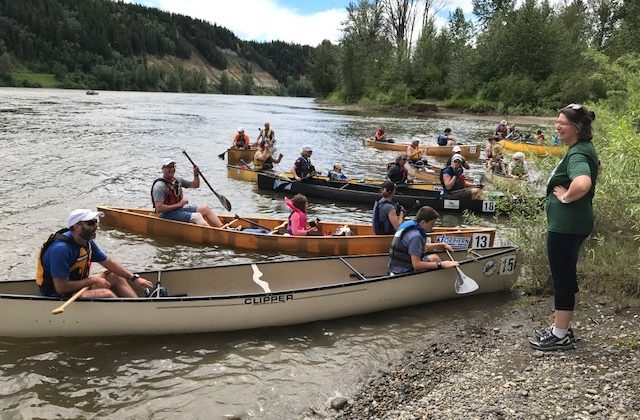 First place in the ‘Alexandre Mackenzie’ Class went to Greg Blackburn and Graham Smith; the 67.5-kilometre race ran from Isle Pierre to Lheidli T’enneh Memorial Park and garnered $2,000 for the top prize.

“We shared the lead at times, we were up front and pulled them and then they pulled us and it came down to Cottonwood Park where there is a shallow area and we got pushed into it and that slowed us down,” said Patrick Turner, who finished second with Kevin Taylor behind the team of Blackburn and Smith.

“That’s with five minutes to go and they just moved ahead a boat length, boat length and a half, and that was all they needed.”

It was a windy day but Turner says that did not affect the outcome of the race. The river condition was ideal, according to Turner.

“I don’t know what happened in behind whether anyone dumped or not, no one in the lead group dumped.”

Chris Cupp won the 25-kilometre ‘Simon Fraser’ Class which began in Miworth. Manning a solo boat, Cupp picked up $600 for his victory.

“I just wanted to start clean to avoid boat bashing,” he says on his approach to the race.

“We had a tailwind to start so that was kind of nice, it got windy when we hit the Fraser River but we were only five minutes from the finish line so it wasn’t that bad.”