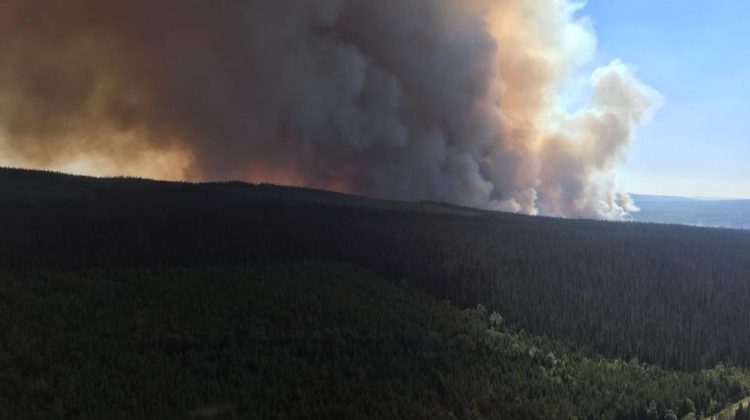 More than doubling its size in the last 24 hours, the Shovel Lake wildfire has grown to 5,000 hectares and remains active within the Bulkley-Nechako region.

According to the BC Wildfire Service, the blaze is now listed as the largest out-of-control blaze in all of the province, burning 25 kilometres Northwest of Fraser Lake and 30 kilometres Northeast of Burns Lake.

The Northwest Fire Centre adds the fire is zero-percent contained.

Almost 100 firefighters are on the ground working to build a guard on the south side of the blaze, in addition to seven helicopters and more than 30 pieces of heavy equipment.

An evacuation alert is still in effect for those living in the rural area.

A smoky skies bulletin, which has now lasted a week long, remains implemented and Northern Health is urging everyone to stay inside, in a cooler area, until the advisory is lifted.

We will continue to bring more information as it becomes available.

The Shovel Lake #BCwildfire, 15 km northwest of Endako, is ~5,000 has. Elevated fire behaviour is anticipated due to increased temperatures and lower relative humidity. Community meeting in #FraserLake tonight and #BurnsLake tomorrow. pic.twitter.com/qDJeisGS7a