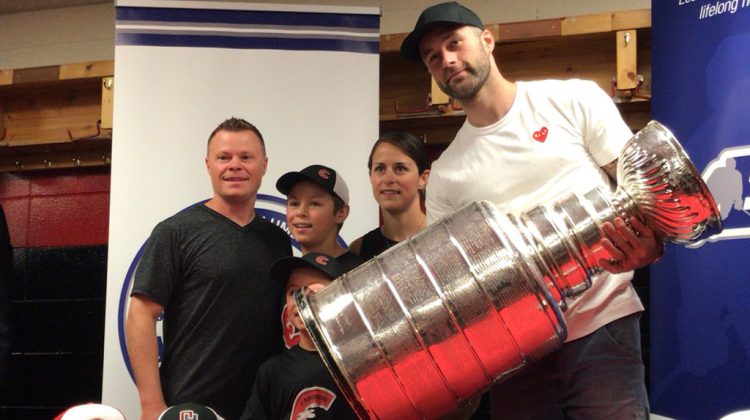 That was one of the quotes Brett Connolly emphasized during his ‘Thank You’ speech before an estimated 2,500 people packed in the CN Centre this afternoon, celebrating his Stanley Cup victory with the Washington Capitals.

The 26-year-old says he’s grateful to see so much support from fans, family, and even complete strangers.

The event, which saw many young kids in hockey sweaters get their first glimpse of hockey’s holy grail, also took note of the more than 2,700 evacuees in the Northern capital displaced by wildfires.

Connolly says he’s aware of what’s going on out west, and even got a chance to talk with a few evacuees himself.

“It’s a scary time for a lot of people, for sure. So we just tried to include as many people as we can and then help out as much as we could. Those are people that are having a scary time right now and hopefully, we can put a smile on their face.”

.@bconnolly8 has allowed lots of little kids to be with the #StanleyCupnthis afternoon; some (not pictured) are evacuees from the #BCWildfires out west | #CityOfPG #StanleyCupinPG pic.twitter.com/Sp2NYvpcCf

Connolly took photos galore with several young players as a way of thanking PG Minor Hockey for everything they did for him on his journey to the NHL.

He is now the third Prince George Cougar to hoist the Stanley Cup.

All proceeds from the celebration’s silent auctions are to benefit the Brock Hirsche Foundation in honour of Connolly’s old friend and teammate.

.@bconnolly8 speaks with the media; touches on the #BCWildfires evacuees & how it’s important to him to share the #StanleyCup with them. More than 2,700 are now in #PrinceGeorge | #CityOfPG #StanleyCupinPG pic.twitter.com/s8aeycn3Tq