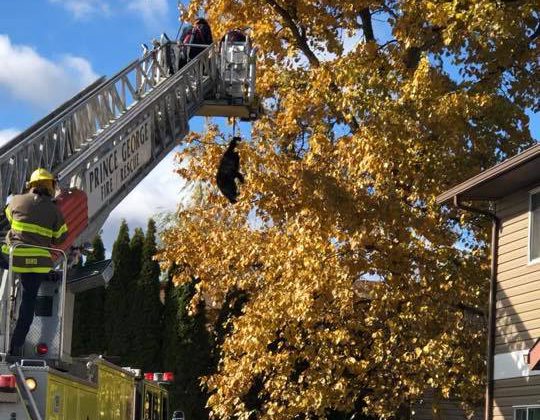 The last of four bear cubs taken from a tree in College Heights | Photo from Facebook, Mehak Jaskaran Singh 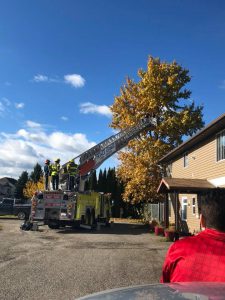 A ladder is used to rescue four bear cubs from a tree | Photo from Facebook, Mehak Jaskaran Singh

College Heights saw its fair share of wildlife this morning.

Conservation officers and the Prince George Fire Department were all present to rescue four bear cubs from a tree on O’Grady road. Posts on the College Heights and Area Facebook page showed a ladder being used to help in the rescue.

A conservation officer at the scene said they had to tranquilize the bears, and that their mother had been put down the day before.

The Conservation Officer Service has yet to make an official statement.

Earlier today in an unrelated incident, another College Heights resident warned people of an “aggressive bear” in the Trent Drive area.

According to Jessica West, a resident who’s lived in College Heights for eight years, a bear tore through her storage shed somewhere between 4:00am and 6:00am this morning.

She said she “had never seen a bear do that kind of damage.”

Her home is located on Trent Drive in lower College Heights.

“You can see the paw prints and everything on the wall, that’s the damage it had done. Between me and my neighbour’s house is a public 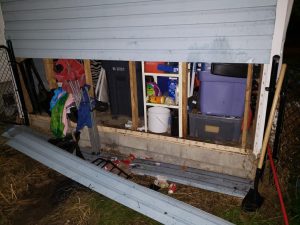 walkway, so there’s a lot of people that use that to walk their dog or back and forth from high school.“

West said she did not call conservation officers because there are so many bears in the area, she “just wanted people to be aware.”