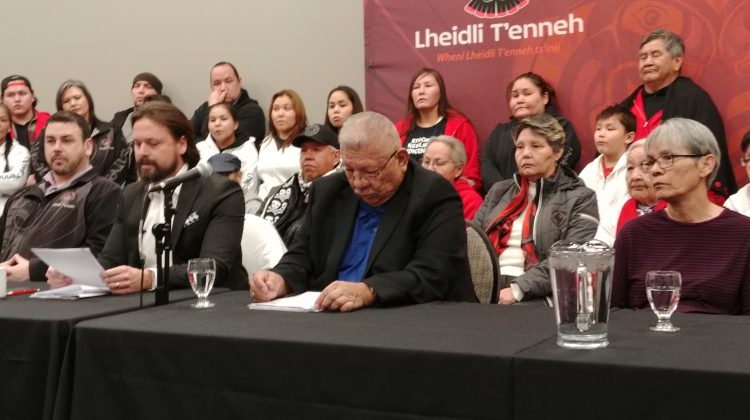 Inadequate communication and the lack of emergency response from Enbridge are two of the main reasons behind the lawsuit.

Chief Dominic Frederick says the explosion breached the trust and confidence in Enbridge to deliver safe and reliable energy through the reserve and traditional territory.

He adds Enbridge has failed to meet with the host first nation since the incident on October 9th.

“They failed to respond to our safety and the safety of our community members, we brought that forward and they gave us lip service.”

Frederick went on to say the explosion has been a very traumatizing experience.

“We still have problems with our kids sleeping at night and every little bang or boom that goes on outside always has them up and looking out the window and wondering is it safe? Am I safe here?.”

The chief also went on to say the recent antics by Enbridge to a no-show from a couple of scheduled meetings with the Lheidli T’Enneh making them feel even more betrayed than they already are.”

“I think it’s disrespectful because we opened the door for them and they did not show up.”

The lack of emergency response isn’t sitting well the Frederick either as leaving a lot of their members in a state of panic.

“It just wasn’t good for our community members to not have first-class emergency response come to our community in regards to Enbridge.”

“When the explosion happened, there is only one route into the community and it goes over the road, out over the pipeline and if there was a sequence of explosions they would have been in great, great danger.”

The lawsuit is seeking relief in the form of a dozen requests including punitive damages, equitable compensation, and special costs.

The lawsuit was filed in the BC Supreme Court in Prince George and no date has been set yet to hear the case.

Enbridge has provided the following statement.

Enbridge’s natural gas pipeline system has been operating in B.C. for more than 60 years. Throughout that time, we have had strong relationships with many Indigenous communities near our pipeline system, including the Lheidli T’enneh First Nation.

The natural gas transported by our pipeline system is a critical piece of energy infrastructure, the operation of which was determined by the National Energy Board to be in the public interest. The gas transported by this system is used to heat homes, hospitals, businesses, and schools. It is also used as a fuel for electric power generation and is a staple in a number of industrial and manufacturing processes that produce products that improve our lives.

It is not in the public interest to stop operating a critical piece of energy infrastructure that millions of people in B.C. and the U.S. Pacific Northwest rely on every day.

At Enbridge, safety is our number one priority. Following the incident on our natural gas pipeline north of Prince George, B.C. on Oct. 9, 2018, Enbridge has been advancing a comprehensive safety and integrity review of our natural gas pipeline system in B.C. This involves undertaking a rigorous inspection of every section of pipeline using sophisticated tools that detect potential problems. This comprehensive program also involves integrity digs and maintenance where necessary. This is an intensive effort intended to validate the safety and reliability of the entire B.C. system.

Enbridge is cooperating with the Transportation Safety Board, which is the lead investigator for this incident. The Lheidli T’enneh First Nation has been involved in the post-incident review process. A post-incident debriefing session on the emergency response on Nov. 21 involved multiple agencies, including the National Energy Board, emergency response services, Enbridge and leadership of the Lheidli T’enneh First Nation.

Enbridge is committed to fostering a strengthened relationship with Indigenous communities, including the Lheidli T’enneh First Nation, built upon openness, respect and mutual trust. We notified the Lheidli T’enneh First Nation of the pipeline incident within nine minutes and immediately began to provide the community with support. The next day, Enbridge representatives participated at a community meeting to provide additional information. We have included members of the First Nation on a flyover of the incident site, participated in two council meetings, and provided numerous updates to the community.

Our CEO Al Monaco has been in personal contact with Chief Dominic Frederick for a one-on-one meeting to strengthen and improve our relationship and committed a team involving senior executives to negotiate a settlement and an agreement to frame our relationship going forward.

We value our relationship with Lheidli T’enneh First Nation and are committed to continuing to work with leadership and the community on strengthening that relationship.