Fire on Parsnip Crescent under control 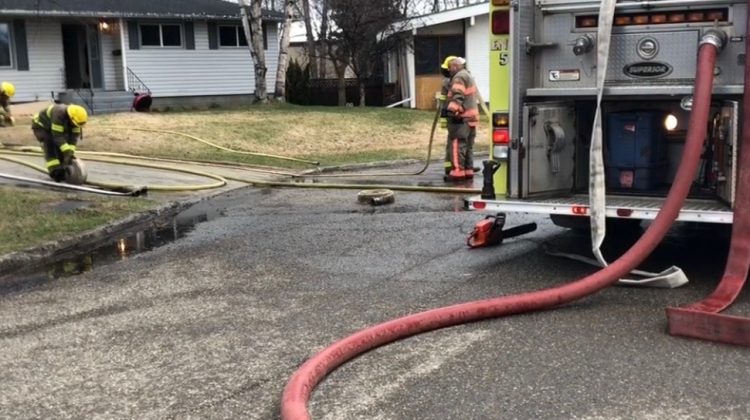 Firefighters at a garage fire on Parsnip Crescent on April 15, 2019, | Photo by Sawyer Bogdan

Prince George fire crews confirmed two people were inside the home at the time of the blaze. One of them went to hospital to be treated for smoke inhalation while the other was unharmed.

Damage to the garage, trailer and home comes to a total estimate of $100,000.

The cause of the fire is under investigation.

Firefighters were able to save the house after a fire broke out on Parsnip Crescent.

Prince George Fire Incident Commander Kevin Scobie said to My Prince George Now the firefighters got the call during their shift changeover.

“When we got on scene, it was a fully engulfed garage fire, and our crew was able to do a pretty quick extinguish on the house.”

RCMP say the fire appears to have started in the carport @mypgnow pic.twitter.com/Ua3CsYtGNr

Scobie said the garage was a total loss and extensive damage was caused to an RV that was parked in the back.

Fire fighters are on scene putting out the fire @mypgnow #fire pic.twitter.com/iB9FYY9CcB

Smoke from the fire could be seen from blocks away. With the help of some rain and quick response, firefighters were able to get it under control pretty fast.

No one was injured, but the cause of the fire is unknown at this time.