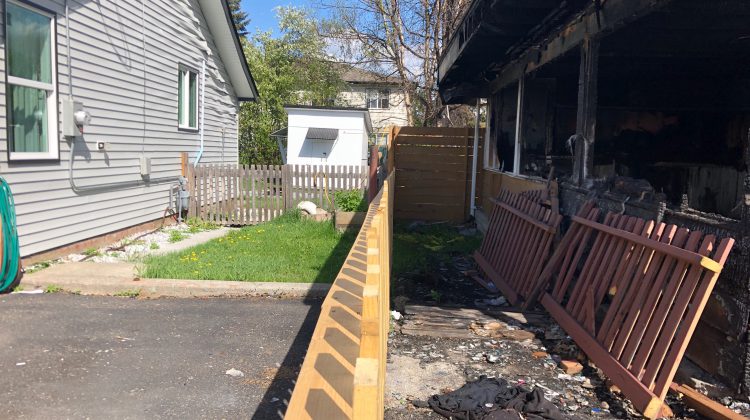 Damaged caused by house fire at 2126 Tamarack St. in Prince George that has caught fire twice. Photo on May 15, 2019 | Photo by Sawyer Bogdan

Some residents on Tamarack St. say they warned the City of Prince George something needed to be done.

Lisa Mitchell, a neighbour next door, had just finished repairs from the first fire when it happened again.

Mitchell said the first fire caused over $10,000 in damage, the second fire $3500, and now she has lost her tenant and is afraid of losing her insurance carrier.

“The backyard went up; our house is damaged again, and our tenants left understandably. Two fires in six months is a little bit close to home.”

The fire melted the siding on her house, and there was fire damage to her fence. She said they have found new tenants but have had to reduce the rent by half until they can do the repairs themselves.

“I called the city, the fire department, the police and told them transients were still going in there and using drugs and I told them it was not a matter of if, it was a matter of when.”

Mitchell said the latest property assessment dropped the value of her home by $10,000 and she is not the only one concerned.

Sean Bennett and his partner moved to the neighbourhood in October, and within a week he had filed his first bylaw complaint.

“I filed a complaint saying the house was a fire hazard. It’s completely unsightly; someone has to do something about it, and three days later the house burned down.”

“Neighbours were in tears (after the second fire). Every week something is happening on that street.”

Mayor Lyn Hall talked to Bennett recently and said the City is looking into it.

“We have some options and that’s why Bylaw Services will take a look at it and see what their options are.”

Since the owner died last August, Prince George Bylaw Services said the house has been in foreclosure and is in the process of being sold, creating issues trying to find someone to take responsibility.

“Something has to happen; someone has to take ownership here and do something because we are all suffering,” said Bennett.