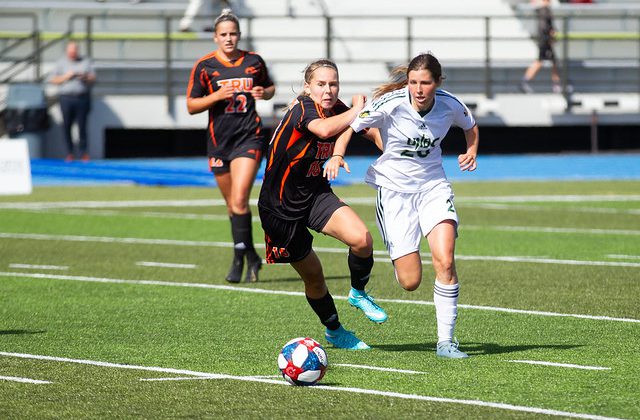 Sofia Jones has the speed to burn and she wasted little time showing it off during the opening weekend of the Canada West Women’s soccer season.

The third-year player from San Francisco, California notched two goals and an assist for the UNBC Timberwolves during a pair wins over the Thompson Rivers Wolfpack (1-0) and the UBCO Heat (3-0).

Canada West named her third star of the week following her strong play, which has the Timberwolves off to a 2-0 start on the season.

Great news!! After a tremendous @UNBCWSoccer opening weekend with 2 goals and an assist, the Bay Area Burner, Sofia Jones has been named @CanadaWest 3rd Star of the Week! Read all about the @UNBC forward’s performance and all the CW award winners here: https://t.co/fpuDoqaaDu pic.twitter.com/kZCnOXxAox

Maya Gabruch of the Saskatchewan Huskies and Kelsie MacDonald of the Calgary Dinos took second and first star respectively in women’s soccer.

UNBC takes on Saskatchewan and Regina this weekend on the road.

POSTGAME: @unbc‘s Sofia Jones had a pair of goals, and talked about @UNBCWSoccer‘s efforts in a 3-0 victory over the @UBCOHeat! Watch! pic.twitter.com/mKV21XDdQL