Where they stand: Cariboo-PG Candidates on the forest industry 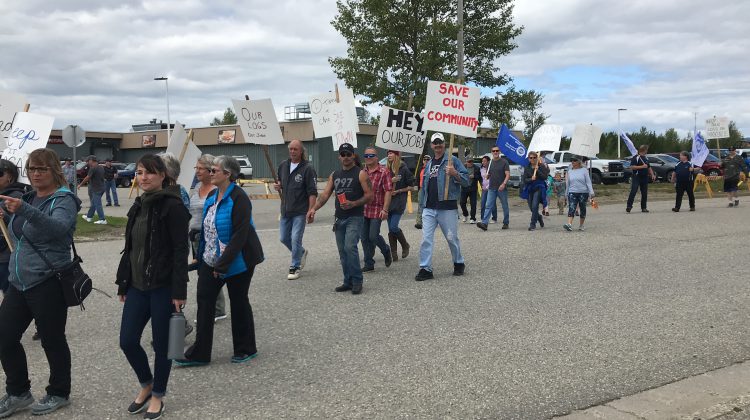 Residents march during the Mackenzie Matters rally against the curtailments and shutdowns impacting their community. (Cole Kelly, MyPGNow staff)

This is the second article in a series focusing on topics that our readers voted most important to them in the upcoming federal election. Every candidate in the Cariboo-Prince George riding got a chance to speak about where they stand on five issues; Crime, Forest Industry, West Olefins, Climate Change, and Immigration.

This article is focused on how federal policy from each party would help, or change, the forest industry.

Doherty said two things need to be addressed first in regards to the current state of affairs in the forest industry; securing a softwood lumber agreement and reconsidering stumpage rates.

“We need to recognize that forestry is one of our cornerstone industries of our country,” said Doherty.

“We have to put a major priority on this, what our industry is facing right now is unprecedented. We have a softwood lumber agreement that is now 3 years past due, so there are duties and tariffs up to 23% that are being levied against our forest producers, plus we have here at home a stumpage regime that is based off the previous year’s sales.”

He said a change in stumpage rates wouldn’t be possible during discussions on a softwood lumber deal so that would have to be sorted out sooner rather than later.

Like the Liberals, Greens, and NDP, Doherty said the Conservatives will also be supplementing the industry with retraining programs, early retirement, and more flexible EI parameters.

Yang, like Doherty, said the People’s Party would relaunch negotiations on the softwood lumber agreement.

“This is our priority, personally I was shocked to see so many sawmills just closing down. Business-wise, this should not happen. We should not get to this stage and still not be doing anything.”

“A PPC government will also remove trade barriers. Not only domestically, within Canada, but also internationally.”

As far as a short term solution for those affected right now, Yang said:

“I read in the papers that there are programs to help them. Also someone is suggesting to retrain them. I don’t think that’s a long term strategic. Those people are in a particular industry and this is our pillar industry. Export is a more positive way for long term and if I am elected for MP on October 21st, we will work on it on Oct. 22nd.”

“If you’re a forestry worker and you’re losing your job right now it doesn’t help that down the road we’re going to re-tool the mills. That’s wonderful and that’s part of the NDP plan too, but what we need right now is the support to keep people in their communities.”

“Forestry, although it is a provincial issue, the federal government certainly has a big part to play in that, things like relaxing the EI rules a little bit and making the EI period longer, another part of the NDP platform that will help these forestry workers is retraining.”

When asked about her thoughts on stumpage fees, Sapergia said:

“The issue with the stumpage fees, which is provincial jurisdiction, is if we change them either up or down, we have to deal with the trade barriers, it’s a multi-layer thing.”

She said it’s her belief that the best course of action on stumpage fees would be to speak with the experts and our American neighbours before making any decisions.

Kerr, who is currently studying forestry, said her family is among those affected by mill closures and she’s looking at the long haul of keeping the industry alive.

“We saw this coming a long time ago and no one prepared for it because we were very focused on short term profits. We need a long term solution, a long term plan.”

“Some of the solutions that we’re talking about are; banning the export of raw logs, that can happen immediately, banning glyphosate spraying on our forests. Pretty much all of BC is sprayed with glyphosate and that kills all the deciduous trees, which can become fire break and beetle break, which would have prevented the disasters we have seen,” said Kerr.

“We need to be relooking at how our forest industry is structured. We need to be supporting more small scale operations like selective harvesting and natural selection and milling more one inch board. Right now, we’re only focused on two inch, and there’s a lot of potential for value added.”

Kerr also stated that, “diversifying and being able to support the industry instead of just giving up on it is the approach that I’m taking.”

As with crime, Calogheros said the forest industry is a provincial and municipal issue that the federal government can help fund.

“These are partnership discussions, none of this is solely federal jurisdiction so it has to be done hand in glove, primarily with the province, but also with indigenous governments and municipalities.”

“Where the federal government can step in to help is around things like the targeted EI access, some of it’s retraining, and some of it’s bridging to early retirement. Again I would suggest that it’s about the federal government supporting local innovation and local initiatives, whether that’s through infrastructure or through funds to help with clean tech and new developments.”

She added that forest practices and management policies are probably some of the main areas that are going to need to be addressed.

Stay tuned for our next Where they stand topic coming out tomorrow (Tuesday) where we will hear from all the candidates on the proposed development of West Olefins.