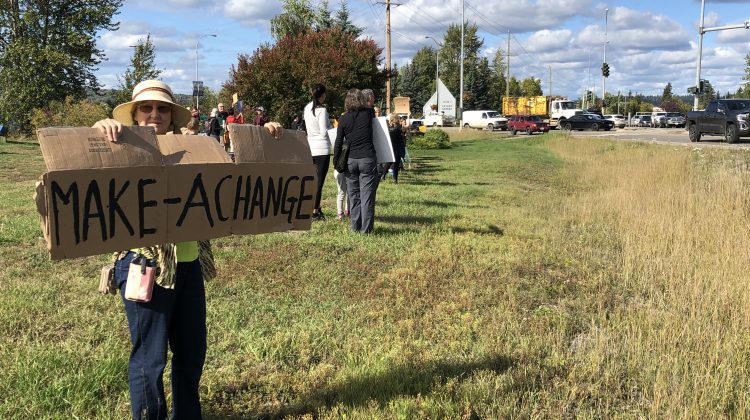 A group of protesters rally at the site of Mr. PG. (Ethan Ready, MyPGNow staff)

Spoiler alert, there’s only one.

This is the fourth article in a series focusing on topics that our readers voted most important to them in the upcoming federal election. Every candidate in the Cariboo-Prince George riding got a chance to speak about where they stand on five issues; Crime, Forest Industry, West Olefins, Climate Change, and Immigration.

In this piece, we are focusing on where each candidate stands on climate change and what they think needs to be done about it. For a full list of party platforms, you can follow the links beside each candidate’s name.

Sapergia said the NDP is all about creating sustainable jobs making our world more adapted to climate change.

“The NDP has a very strong platform on trying to mitigate climate change. Part of that platform is 300,000 new sustainable jobs, such that we are transitioning away from the traditional manufacturing kinds of jobs where we are burning raw materials that we are manufacturing, take those bits and pieces of wood and using them to make things like door frames and window frames,” she said.

All but one party mentioned subsidies for retrofitting homes and businesses.

“My generation, middle age and older, is being taught by the young people, they believe in climate change and they’re the drivers of this so we need to be listening to the young ones. This is the world we’re leaving them and if we don’t leave them a world, what have we accomplished?”

Doherty said the Tories “launched one of the most comprehensive platforms ever seen” with 55 achievable policies.

“We believe in investing in technology, not taxing everyday Canadians. We know the carbon tax isn’t the way to go when that punishes everyday families and lets the biggest emitters off with a 90% rebate.”

In line with initiatives from other parties, Doherty said the Conservative green home renovations credit will help families retrofit their homes with greener technology.

“What we’re proposing is to invest in green technology and then be able to actually take it globally and assist other countries in their fight against global emissions.”

The Grits announced their platform of net zero emissions by 2050  recently.

“The goal is laudable and it’s one that I think is doable if we all work together. I don’t think there is any party out there that has cornered the market on good ideas and that we need to be listening to everybody’s ideas if we are really going to get to the point where we’re at zero emissions by 2050,” said Calogheros.

The question of the hour for the Liberals is how their ambitious platform ties in with the purchase of a pipeline.

“It’s a misnomer to tie the two together. The Transmountain Pipeline was the best decision that we were going to make when we’re looking at pipelines. If we are going to sell our resources, particularly the bitumen that we’re pulling out of the oil sands, it has to get to market. It makes zero sense for us to be transporting it by truck or by rail. It also doesn’t make a whole lot of sense for it to be trapped in a North American market where we are essentially being held prisoner to the prices that the US wants to pay,” she said.

“The notion that we’re going to stop using oil tomorrow is not realistic. So I don’t see it being tied to climate change directly, obviously, oil has an impact, but I don’t think the pipeline and our climate change goals are necessarily at loggerheads.”

“We have a 20 point climate plan called Mission Possible. Our target is higher than all of the other parties and it’s the only target that will get us where we need to be. The other plans are too moderate, too slow. So we really need to be taking drastic action, which we wouldn’t need to be if we took action 30 years ago, but we didn’t,” said Kerr.

“We want to be net-zero by 2050 and we have a plan to get there. We need to be looking at every single avenue in our economy, in our individual lives, at the huge top-down levels. Charging big polluters a high carbon tax.”

Kerr said the Greens would be funding subsidies for electric vehicles, aviation, and retrofitting homes, adding that we could be creating jobs immediately.

“We want to make it affordable and accessible to get renewable energy. We could be employing people right now that are laid off from the mills to retrofit homes.”

A big part of the Green platform is the reallocation of money from fossil fuel companies to renewable energy development.

“Taking away the subsidies for fossil fuel. It’s about 4.4 Billion every year and I think that if the industry can’t stand on its own without that much help from the federal government and it flops, then it shouldn’t have stood in the first place,” said Kerr.

Yang said her party is the scientific party and that there is no proven science behind climate change.

Yang likened the Environment Minister talking about climate change in the House of Commons to an infamous Nazi politician.

“Remember who else did this? I studied history, Joseph Goebbels said this. This is the most notorious politician in the history of humankind. I don’t want to be misled by the people. We need common sense, a scientific approach to deal with the challenge we are facing.”

“We will use common sense. We will use a scientific way to deal with air, water, earth pollution. That’s the key thing.”

Yang said the PPC would invest funding into finding a renewable energy source but will make no commitments to reducing emissions.

“We are not going to kill our industry and kill people’s livelihood for an idea which is physically and scientifically not proven. We can’t do something based on ideology.”

“I love environmental protection,” she added.

All five will be meeting for an all-candidates forum tomorrow night (Thurs) at Trinity United.