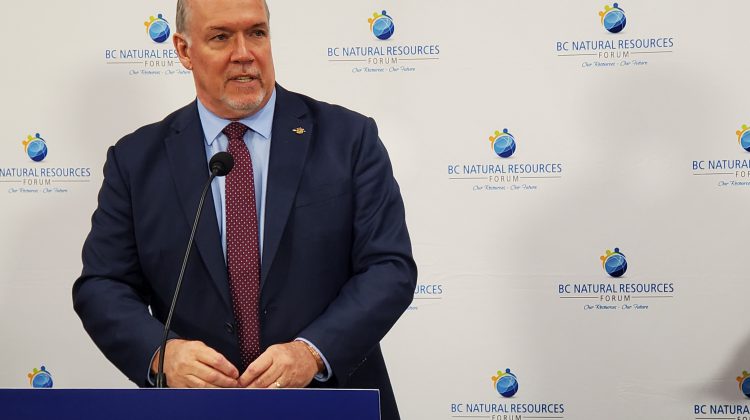 Although the premier initially praised the province’s flourishing petroleum and mining industries, he also spoke on the ongoing issues facing the forestry sector.

“On the forestry side, there are challenges. These are acknowledged by everyone… they’ve been building for the past couple of decades. It’s not just pine beetle and it’s not just fires.”

He criticized existing philosophies on natural resource harvesting, explaining that the existing mentality of “harvest as much volume as you can, when you can” is “not sustainable in 2020”.

Horgan briefly touched on the appointment of former MP Nathan Cullen to resolve the ongoing dispute between members of the Wet’suwet’en First Nation, and Coastal GasLink, adamantly claiming:

“We are confident there is a way forward.”

When speaking on the project, Horgan emphasized positive aspects while insisting that he believes continued conversation with those who oppose the project will result in greater understanding.

“The courts have determined that the project is legitimate and should proceed, and I acknowledge that and respect that,” the Premier clarified.

When the conversation shifted towards strategies for supporting the continued success of forestry in the region, Horgan said that he believes cultivating a wider variety of buyers for BC forestry products is critical.

“Almost 55% of BC wood products are destined for the United States. We’ve been working to diversify that and we’ve been successful in Japan, China, and Korea,”

“The existing structure is not necessarily responsive to market conditions, which is a legitimate concern.”

The Natural Resource Forum will continue in Prince George until tomorrow (Thursday).