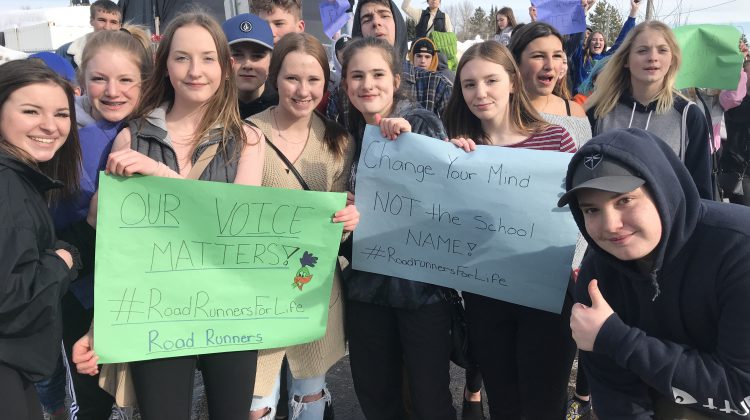 Students at Kelly Road Secondary School held a protest/student rally Wednesday during the lunch hour in relation to School District 57 voting to “engage in the process” of approving a name change to Shas Ti Secondary.

The new facility is scheduled to open in September.

The potential change received support on Tuesday from the SD 57 Board of Trustees after they received a request from Lheidli T’enneh elders.

Students from Kelly Road Secondary School organize protest/walkout on the name change that was approved by @SD57PG at last night’s meeting #CityOfPG pic.twitter.com/0qr0jB180U

Shas Ti means a grizzly path or trail, which is where the new school is built on. 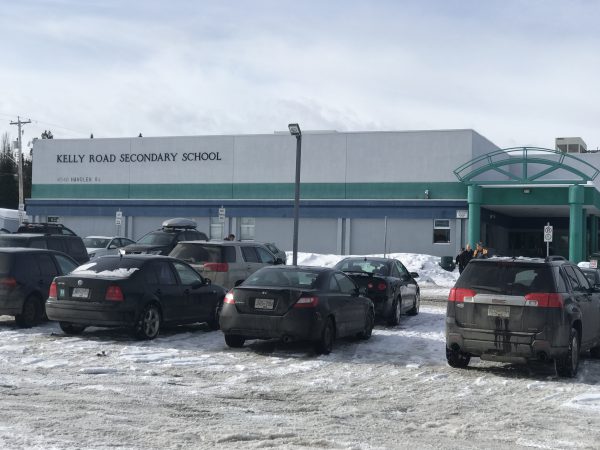 Gloria Butcher is a Grade 10 student at Kelly Road who believes the students should have more of a say.

“Oh yeah, we should have had an anonymous vote and had their voices opinionated. We have a voice too and we want to be heard and if there was a vote then things would have been more civilized.”

“A lot of students are very disappointed, we were excited for a new Kelly Road and not a new whatever.”

Teagan Lorenz and Ashlynn Marr are Grade 9 students at Kelly Road who believe the tradition of the school should be carried on into the new facility when it opens in September.

“It’s been the same name, same colours, a lot of our parents and grandparents have graduated from this school and to see our school name change overnight, concerning the fact that they are going to build a new school and to make it better should at least include the same name.”

Shas Ti Secondary is the Dakelh name of the school that was given the controversial thumbs up.

Lorenz believes the district and the school should have tied in the aboriginal connection through coursework and presentations, making a name change unnecessary.

“I think they could have maybe taught us about first nations instead of changing our names and they do give us presentations and stuff, which I agree on. I just don’t agree with changing our whole school name.”

“Students shouldn’t have the full vote but I think since we’re the ones attending we should have a say in this.”

Butcher adds the familiarity of the school’s current name is also huge for the entire Hart community of Prince George.

“Kelly Road has just been a staple in the Hart community and I have talked to many, many students as you can see and we don’t want a name change, we are not meaning to be rude or anything, it’s just that Kelly Road is Kelly Road.”

(This is a corrected a version of our earlier story)