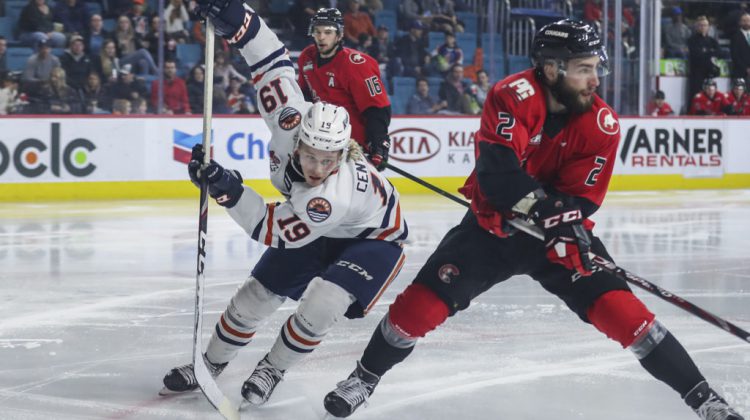 The Prince George Cougars outscored the Kamloops Blazers 3-1 over the final 50 minutes.

The problem for the Cougars though was that they allowed a whopping five unanswered goals in the first 10 minutes of the game before 4,178 fans in Kamloops.

The B.C. Division-leading Blazers completed the weekend sweep of the Cougars in the home and home with Kamloops winning 6-1 on Friday and 6-3 on Saturday.

The Cougars extended their losing streak to four games and they have also dropped nine of their last 10.

Tyler Brennan was pulled after allowing 4 goals on 8 shots.

Taylor Gauthier stopped 21 of 23 after replacing Brennan at the 7:31 mark of the opening period.

The Cougars, playing their sixth game in nine days, scored three times despite having a season-low 15 shots.

Vladislav Mikhalchuk (power-play) scored in the second period and Majid Kaddoura (power-play) and Brendan Boyle scored late in the third period for the Cats.

Cougars captain Josh Maser had his eight-game point streak come to an end. Maser had 12 points (4-8-12) during his streak.

Prince George has 9 games remaining and Seattle has 8 left.

The Cougars host Lethbridge Wednesday and Vancouver Friday and Saturday before concluding their season with six games on the road.