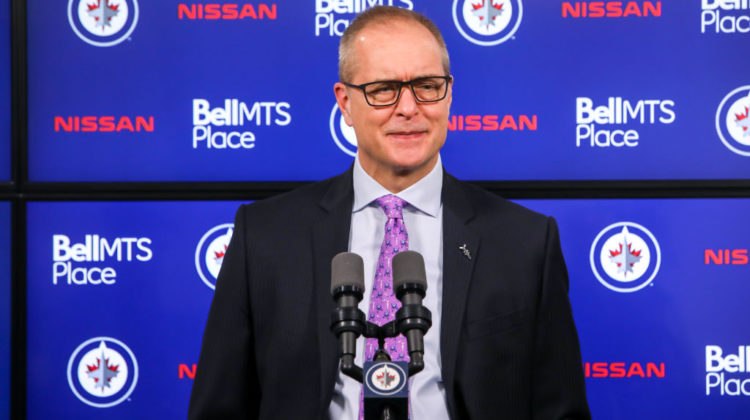 Head Coach Paul Maurice of the Winnipeg Jets answers questions in the post-game press conference following a 4-3 victory over the Columbus Blue Jackets on Hockey Fights Cancer Night at the Bell MTS Place on November 23, 2019 in Winnipeg, Manitoba, Canada. (Photo by Jonathan Kozub/NHLI via Getty Images)

Jansen Harkins seized an opportunity with the Winnipeg Jets

“I think what you have with a guy like Hark is a guy that’s going to be in the National Hockey League for about 14 years. Young players don’t understand the value of an opportunity but Jansen Harkins is the exception to that rule.”

“He was clearly the first of three (new players) in for us because of his training camp. That goal he scored, he may have scored that goal ten times in the last three weeks, it’s off his stick sooner than you think and it’s bar down.”

Harkins found his groove in the American Hockey League earlier this year with the Jets affiliate the Manitoba Moose where he recorded 31 points in 30 games and was named the team’s MVP.

“What he did was he forced an opportunity. With the Moose, there was no choice but to call him up and then he gets into the lineup and practice and he works so hard that you have to play him.”

🎥 Nikolaj Ehlers and Jansen Harkins speak with the media after both scoring their first NHL Playoff goal in a 3-2 win over the Calgary Flames. #WeAreWPG pic.twitter.com/zy95brdNiH