Harkins ready for take off with Jets 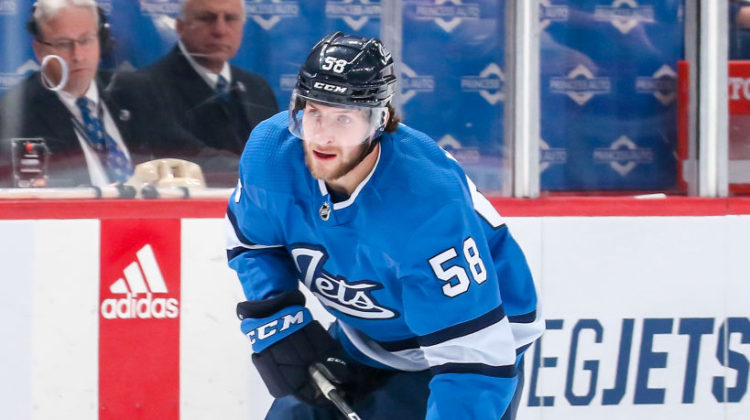 WINNIPEG, MB - MARCH 3: Jansen Harkins #58 of the Winnipeg Jets plays the puck down the ice during second period action against the Buffalo Sabres at the Bell MTS Place on March 3, 2020 in Winnipeg, Manitoba, Canada. The Jets defeated the Sabres 3-1. (Photo by Jonathan Kozub/NHLI via Getty Images)

It’s not often rookies are thrown into the playoff spotlight but in the case of Jansen Harkins, he was the next man up.

The 23-year-old is relishing his time with the Winnipeg Jets who trail the Calgary Flames 2-1 in their best-of-five Stanley Cup qualifying series in Edmonton.

After star forwards Patrik Laine and Mark Schiefele were lost due to injury in Game One, Harkins was inserted into the lineup by head coach Paul Maurice where he potted his first-ever NHL playoff goal during Monday’s 3-2 victory.

“You want to make a difference and getting the chance to play and getting some ice time is a lot more fun than watching the team go out there and work,” said Harkins.

Maurice had high praise for the ex-PG Cougar who attributed a strong training camp to him earning a spot in the Winnipeg lineup. 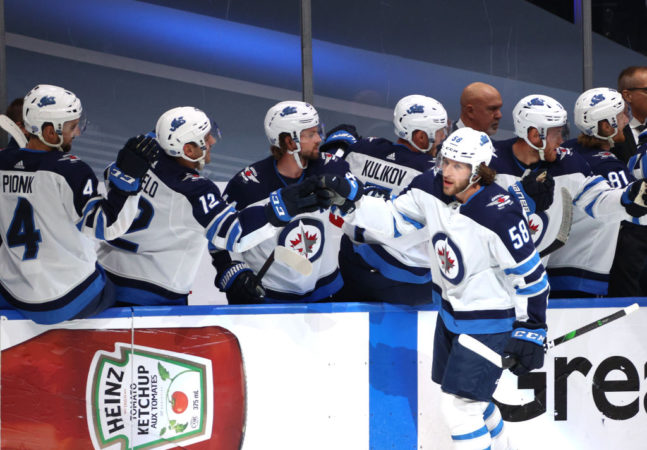 EDMONTON, ALBERTA – AUGUST 03: Jansen Harkins #58 of the Winnipeg Jets celebrates his goal with teammates during the first period of Game Two of the Western Conference Qualification Round against the Calgary Flames prior to the 2020 NHL Stanley Cup Playoffs at Rogers Place on August 03, 2020 in Edmonton, Alberta. (Photo by Dave Sandford/NHLI via Getty Images)

Harkins appreciates the sentiment from his bench boss but admits he’s always made it a goal to be among the most notable players on the team.

“Every coach I have ever played for I have just worked hard and showed what I could do and to stay focused off the ice as well so I mean that comes full circle and eventually you just stick with it. You definitely want the coach on your side and I feel I’ve been working hard to earn that trust.”

It’s been a meteoric rise for the Cougars all-time leader in points (242) and assists (167) who paid his dues in the minors for the last three seasons with the AHL’s Manitoba Moose and the ECHL’s Jacksonville Icemen.

“I’ve been kind of just been chipping away for so long that eventually I broke through and haven’t really changed anything that I was doing. When I first turned pro I started working on a lot of different things and learned new stuff from different players, coaches, and everything like that implementing everything they taught me.”

Harkins was named the Moose’s team MVP in June after recording 31 points in 30 games.

Due to the pandemic, this year’s NHL playoffs have a different feel to it with Edmonton and Toronto as the host cities, thus creating a “bubble” environment.

When asked about what the experience has been like up to this point, Harkins noted it’s not too much different comparing it to a tournament-like setting during minor hockey.

“It’s pretty different from everything we have kind of gotten used to playing hockey but with that being said it’s pretty cool for me starting out and being a young guy experiencing something like this is pretty cool.”

“I’ve seen pretty much every player on every team since I have been here but there are some teams you see a lot more than others but it’s kind of strange walking side by side and eating across from each other that you’ve been battling with on the ice.”

“You kind of compare to any other tournament you have played in being at one location going from the rink back to the hotel. There are some good restaurants and common areas we can hang out at but it kind of brings you back to when you were younger playing youth hockey.”

Harkins also suited up in Winnipeg’s 6-2 loss in Game Three recording no points.

Game four is set for Thursday night in Edmonton with the season on the line for the Jets.

Harkins expects his team to come out firing after a much-needed off day.

“We haven’t played in back to back games for a long time so I think it kind of got away from us a little bit yesterday and we just reset a little bit and come out with a good effort tomorrow and we are pretty confident we can get it done.”