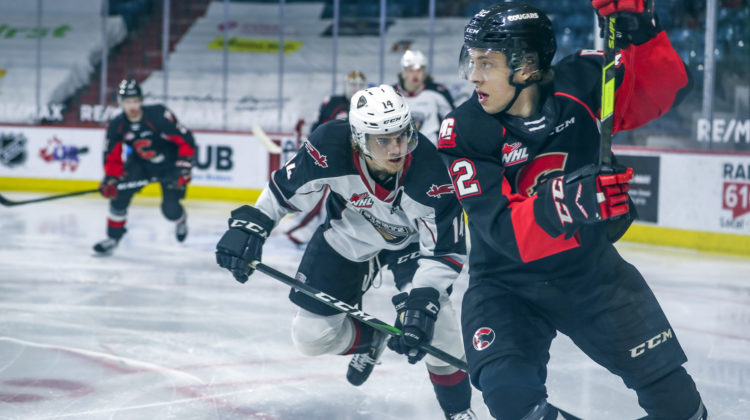 In a game filled with hits, fights, saves and some timely offense, it was a defensive lapse that was the difference for the Prince George Cougars.

An errant clearing attempt by Ethan Samson inside the Cougar blueline led to a breakaway goal by Adam Hall at 11:30 of the third period to ensure a 2-1 victory for the Vancouver Giants on Monday from the Sandman Centre in Kamloops.

“We gave two points away right at the end. We didn’t stick with it and we turned the puck over, that’s the disappointing part because we did so many good things and then gave it away.”

“It was a hard-fought game where you had to just stick with it and in those types of games it was a chess match and whoever makes the mistake in a big game is tough because a game like that should really go into overtime.”

The intensity was palpable as both teams took turns to the penalty box in the first period.

A kneeing penalty assessed to Cougars forward Craig Armstrong was followed up by a slew-footing double minor to Giants defenceman Alex Kannok Leipert.

Eric Florchuk kickstarted the offense for Vancouver at 17:44 of the opening period sliding a Justin Lies feed past netminder Taylor Gauthier for a 1-0 lead.

After a scoreless middle period, 15-year-old Riley Heidt broke the goose egg of Vancouver goalie Trent Miner to even the score at 1-1.

In addition, both teams went a combined 0-for-9 on the man advantage.

The off-ice officials declared the game a goaltenders duel as Gauthier and Miner were named third and first star respectively.

The Cougars have lost back-to-back games and drop to 4-5-1-1 on the season.

With the halfway point of the season now here, Lamb states the team, which has 10 rookies on it, has grown by leaps and bounds since the return-to-play was announced.

“I had no idea how the young guys were going to fit into this league. This experience has been unbelievable. I didn’t have any expectations because I didn’t know where they would be but I am really happy with how everyone is gelling.”

Vancouver sits atop the BC Division standing with an 8-3-0-0 record, two points ahead of the Kamloops Blazers.

The Cougars are back in action Thursday against the Blazers at 7pm from Sandman Centre.