Rockets have a good Knight at the Cougars expense 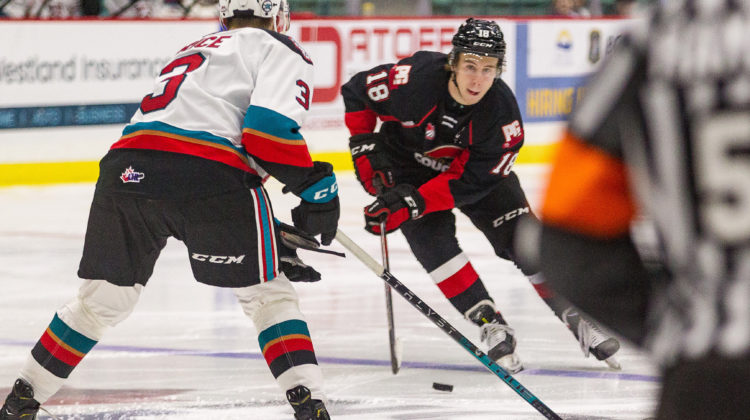 The Prince George Cougars failed to cash in on Mega 50/50 Jackpot night that exceeded $80,000 at CN Centre.

Before a season-high 2,554 fans, the visiting Kelowna Rockets skunked the Cougars 3-0 to complete a weekend sweep.

Knight, who struggled in his last two starts, (allowing seven goals on just 13 shots), stopped all 21 shots he faced.

At the other end, Tyler Brennan was the best Cougar, blocking 30 of 32.

Andrew Cristall and Max Graham scored goals in the second period six minutes apart, both assisted by Jake Lee, and Tyson Feist tallied into an empty net in the final seconds of regulation.

Action from last night’s contest against the @Kelowna_Rockets.

The Cougars again struggled on the power-play, going 0-for-5.

Prince George has the worst power-play in the WHL at just 10.3 %, and they are just two for its last 42 with the man advantage.

Kelowna is 3-0 against P.G. this season.

The Cougars were without four players due to injury in Bauer Dumanski, Caden Brown, Kyren Gronick, and Fischer O’Brien.

17-year-old Gavin Schmidt, fresh off signing his WHL Standard Player Agreement, made his debut for the Cats.

The Cougars are 1-3 on a six-game homestand and have scored just nine goals in their last seven games.

A MEGA congratulations to our 50/50 winner from tonight’s game! Our total jackpot was $80,410! pic.twitter.com/ci48cz5dTI

We will also include the hashtag #WHLscores in order to be consistent with previous posts. pic.twitter.com/bVWmVfCA8V