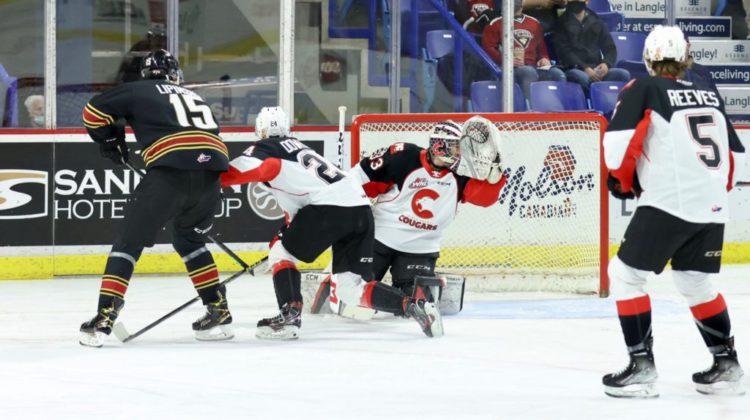 The Vancouver Giants snapped a 1-1 tie with a pair of second period goals less than three minutes apart and they went on to a 3-1 victory over the Prince George Cougars.

The game was played Saturday night at the Langley Events Centre before 2,695 fans.

The game highlights are right here.

A couple of streaks came to an end, the Giants five-game losing skid and the Cougars five-game winning streak.

Jaren Brinson tallied for the Cougars, his first WHL goal in the opening period.

Neither team scored on the power play, with PG 0/3 and Vancouver 0/2.

Despite the setback, Cougars’ Associate Coach Josh Dixon said they had their looks and chances, but the bounces didn’t go their way, “We had 35 shots, we had power play opportunities, we were around the net and had some great scoring chances, but we just couldn’t capitalize.”

The (13-15) Cougars head into their Christmas break.

They will host Everett on Dec 28th and 29th and also entertain Kamloops on Dec 31st.

The Cougars beat the Blazers 5-2 Friday night in Kamloops.

Prince George is 4th in the B.C. Division, three points behind both Kelowna and Vancouver and four ahead of Victoria.

The Cougars are 3-4 against the Giants this season.

Their road record slips to 5-9.

Prince George is 6-3 in the month of December.

Despite playing 28 games, the Cougars still have not played into overtime this season.