PG Cougars wheel and deal for a second consecutive day 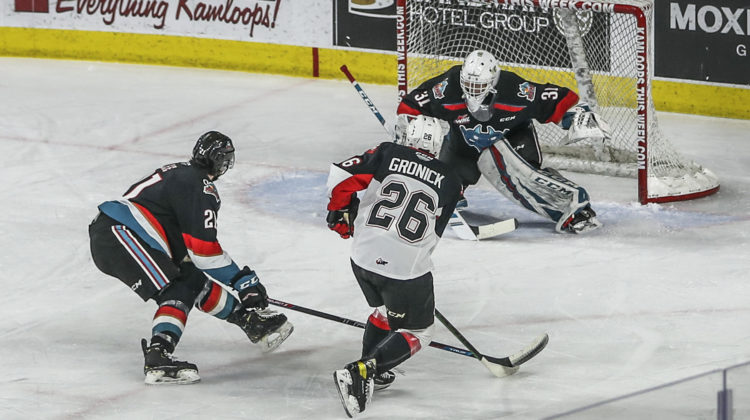 A day after sending 20-year-old goalie Taylor Gauthier to the Portland Winterhawks, the Prince George Cougars made another deal, this time involving forward Kyren Gronick.

In exchange, the Cougars traded the 17-year-old Gronick to the Blades.

The Cougars have also sent a 2025 fifth-round pick to the Tigers.

Gronick has nine points (three goals) in 21 games this season.

He was selected by the Cougars in the second-round, 26th overall, in the 2019 WHL Bantam draft.

“We see both Cayden and Carlin as good fits to our young group of forwards,” said Cougars’ General Manager & Head Coach Mark Lamb. “We feel both have plenty of upside and we look forward to adding them into our line up.”

Glover was drafted by the Tigers in the second round, 25th overall, in the 2019 WHL Prospects Draft. The product of Brandon, MB had five points (3g-2a) in 15 games with the Tigers this season. Last season, Glover had one assist in 15 games as a 16-year-old rookie. Prior to playing with the Tigers last season, Glover had six points (3g-3a) in five games with the Southern Alberta Hockey Academy in the Canadian Sport School Hockey League (CSSHL).

“Glover is a physically strong player with offensive upside. He has a great shot and has a track record of scoring at lower levels,” said Cougars Director of Scouting, Bob Simmonds.

Dezainde signed a WHL Standard Player Agreement with Medicine Hat during the 2020-21 season. The product of Calgary, AB had four points (1g-3a) in 13 games with the Tigers last season. In 21 games this season, the 17-year-old had a pair of assists in 21 games.

“Dezainde is an excellent skater who brings a lot of versatility. He plays with energy and pace and still has a lot of untapped potential,” said Simmonds.