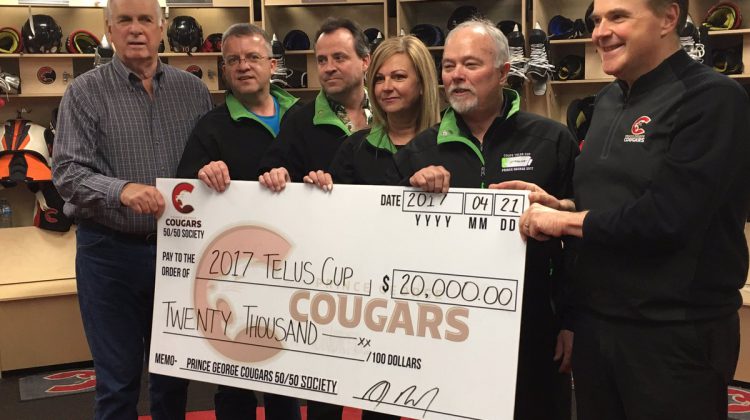 With the 2017 Telus Cup just days away, the Cougars 50/50 Society have decided to help out the organizing committee, as well as the host team.

Prince George handed out two separate cheques with a total value of $60,000; the Telus Cup committee will receive $20,000, while WHL team’s affiliate club, the Cariboo Cougars, will get a funding boost of $40,000.

“Everything from the bus, to the food, to the rooms, to their entertainment; everything is it is done by us here. So we’ve done a great job with the people in Prince George.”

While he’s grateful for the assistance of the Cougars Society, Morrison adds a National championship, such as this one, can cost as much as $450,000.

Cariboo Cougars Head Coach and General Manager Trevor Sprague is beyond excited for his parent club’s $40,000 donation, which he says will go towards travel costs.

“A lot of this goes right to the Mac’s Tournament; it’s a little bit of relief for the parents where they don’t have to worry about the hotel or food or travel or any of that.”

Sprague is now looking ahead to competing for the Telus Cup both as host and the BC Major Midget League (BCMML) champions.

He says he looks forward to the challenge of winning on home ice.