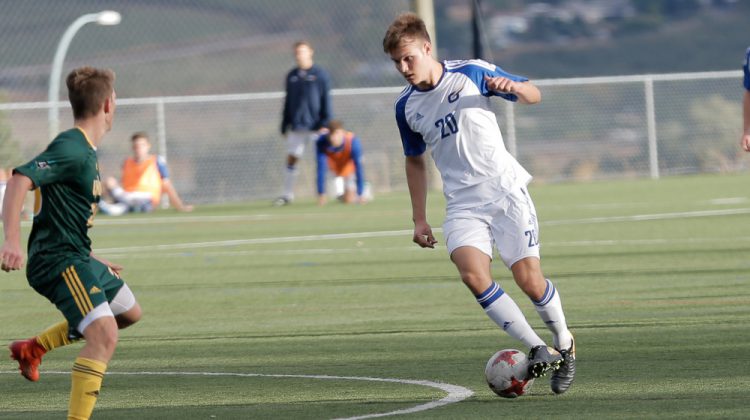 It was a productive weekend on the road for the UNBC Timberwolves men’s soccer team as they battled to a pair of scoreless draws against the UBC Okanagan Heat in Kelowna.

On Saturday, the T-Wolves outshot the Heat 6-4 overall, which saw a combined 23 fouls against both teams.

Tyrone Venhola and Mitch McCaw picked up the result in goal for their respective teams.

The action was a little more chippy on Sunday with 26 total in fractions with 16 of those called on UNBC.

Gordon Hall and Tofa Fakunle picked up yellow cards in the game.

The Timberwolves remain in fifth place in the Canada West Conference at 4-5-5 and will play their final two games at home next Friday and Saturday, 7PM against the UFV Cascades.

In women’s action, the T-Wolves dropped a pair of 1-0 decisions to the MacEwan Griffins in Edmonton.

Raeghan McCarthy scored the lone goal in Saturday’s match for the Griffins in the 65th minute past goalkeeper Brooke Molby.

UNBC was outshot 21-9 overall and also gave up the edge in corner kicks by an 8-2 margin. On Sunday, Molby almost stole a point for the Timberwolves singlehandedly as she made 16 saves in defeat.

Megan Lemoine potted the game-winning goal in the 81st minute of play, which turned out to be the Griffins 28th shot.

UNBC drops to 2-7-1 on the season and are tied for the last playoff spot in the Canada West with the Thompson Rivers Wolfpack, but do hold the tie-breaker thanks to a 3-0 season opening victory last month.